Ah. June. And my last week.

We had a little bit of sun this morning before the clouds blew in. I ran around watering everything outside, and will soon be watering the houseplants. Meanwhile, despite the coolness of the morning, I’ve got the house open and I’m enjoying the weather. Summer, Oregon-style.

It’s also helpful that I’ve gotten the office and bedroom cleaned out and organized into what should be its final form until we move to Farpoint. It’s now a working home office. I’m going to miss it, and will do my best to structure the Farpoint office to be very similar.

I was able to find a good setting for my Welches plate. 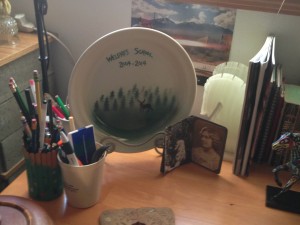 So now I have an image of what and where I’m going to be working.

The garden is also doing well. We’ve been harvesting green onions; in fact I had to advise the hubby that we need to save some green onions to grow into big onions (I have about 25 more sets to plant as we use up the greenies, so no big deal). The sugar pod peas should be producing their first crop, and the apple trees have maintained a good crop of apples despite the June drop. What remains is turning into good big apples, though apparently I didn’t clear the grass around the Gravenstein trunk soon enough to keep the scab away. Oh well.

The cabbages, cauliflower, and broccoli are growing quite happily. So are the green beans. The tomatoes are starting to flower.  It’s looking like we will have a lovely harvest this year, if everything proceeds as it should. I may even get ambitious next week and put in some starts for fall and overwintering crops.

And today is my last Monday at work. The last Monday I need to look at work e-mail. The last Monday where I look at the time and realize that I need to get moving, because the clock is ticking toward the moment when I have to get my butt to the car because I’m on a schedule.

Comments Off on Ah. June. And my last week.

Most of it was housework and housecleaning. I thoroughly dunged out the dust bunnies in the bedroom, doing a deep cleaning, and sorted my summer clothes into the drawers and closet. Had to change my shirt after, it was so dusty. But the room is clean!

Then I hung covers over three of the four skylights. I love the skylights, but not when the sun is at this angle.

After that, I buckled down and did the Big Reorganization and Muckout of my office. I’ve brought home most of the big office supply stuff from work, so all of the little filing things I’ve purchased over the years to manage paper and office supplies at work came home. I also brought my office chair home. I’d bought it five years ago, when the work chair hurt my back, and budgets were so tight that I didn’t even bother asking for a new one. It works so much better than the one I’d bought for home at the same time. I am quite happy with that.

I also brought home all my filing trays. I collect filing trays like a crazy woman, and most of these trays go back to my first home office setups over twenty years ago. The wire bookshelf I bought to hold my binders and worksheets, I’ve converted into a set of supply and filing shelves.

Finally, I moved chairs and backstock books around. I have to figure something out for books, but not the basement here. Basement in Enterprise, yes, once we’ve finished remodeling.

Ultimately, I got rid of almost all the piles of paper and junk. There are clutter catchers which should help keep paper and clutter sorted, and now that I won’t be driving two hours a day, I should be able to stay on top of keeping the work space within a reasonable state of order (I am glad my aide S. probably isn’t reading this; she’d be howling with laughter. She’s spent ten years keeping after me as well as the kids). However, I don’t really have any excuses. I should have time.

I also found a safe place to display my Welches plate.

But still, I’m coming hard up against the reality that man, I have a lot of gewgaws I need to dispose of. I’m just not sure where…yet. Or else I will have revolving displays. That means a much better job of storing stuff needs to happen.

For now, the office and bedroom are clean. And I am gonna go shower, because that’s enough retirement/prep for total freelance life nesting for now.

Comments Off on Ambitious day today

Yo. I am still a jelly/jam-making studette. 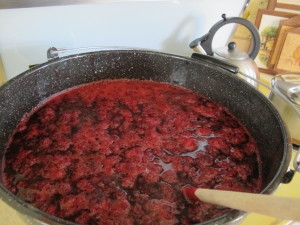 Loganberries getting cooked for juice to make jelly.

We went down to our friend S’s in Clatskanie today to make jelly. He had five gallons of loganberries thawed plus a gallon of raspberries; we had a gallon of blackberries. Between the guys doing the cleaning and prep work while I did most of the cooking, we cooked something like 31 jars of jelly; 22 pints and 9 half-pints (plus leftover 2/3 pint of loganberries and miniscule bowl amounts of raspberry and blackberry jellies); 5 half pints of raspberry jelly, 4 half pints and 1 pint of blackberry jelly, and 21 pints of loganberry jelly.

I feel quite accomplished (and quite tired) tonight. 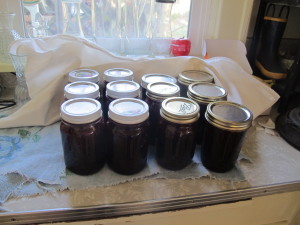 Blue lids plus white ring in foreground are blackberry, red lids are raspberry, and the rest is the remainder of the loganberry.

Comments Off on Queen of Jelly

Classic Western Oregon June summer day–rain, partially cloudy, and 60s. Sooner or later we’ll get warm here, but this is a pattern I’m well familiar with. Still would like to see it go away before Blues Festival, though.

It was a busy day, but I got stuff done. House doesn’t look like it, but I actually was rather productive. Got a car to the garage, wrote about 1300 words, rode horse, made taco salad, cooked asparagus and prepped strawberries and blueberries. After this post I’ll probably work on mucking out the office and getting ready for my Friday-Saturday class, as well as getting ready to start on my online classes. Busy summer.

Actually, this morning, after dropping the car off to the garage, I hiked through part of the old neighborhood and settled in at the local Starbucks to sip some tea and write. I had to wrestle with my phone, but I now have a lovely transit app which lets me check when buses are due. Go me! It took some fussing because the TriMet page on my phone’s browser kept wanting to do something with Facebook, but I finally beat everything into shape. And now I can haz transit tracker (very useful in the land of PDX and for the rest of the summer!).

We had a nice little walk-trot work, with bending and flexing and circles and loops and patterns and all sorts of stuff. I also worked on extending and shortening in the trot. She does it reasonably well in walk and canter, but trot is where she can get really stubborn and bullish. So we’re spending summer schooling working on that bit. No particular reason for her to do it bareback, that part is mostly for me. This time around I didn’t notice as much of a tendency to slump, and we did a lot more trot work, even working on extensions with me sitting instead of posting.

At the end, Mocha lined out in her huge walk, swinging through her shoulders and back. That’s a really fun walk to ride. She prefers to do it on a long rein with a low head, and man, can she power walk with a low head. Ain’t no peanut roller with this girl and a low head–that’s her moving out gear at the walk, and she shows it well.

She’s also much shinier than she was last year. I don’t know, her coat seemed not quite right most of the year last year, at least until I shaved her for the winter. This year she’s sleek and shiny. Of course, I’ve spent a lot of time at the barn the past two weeks and brushing her. I’m trying to get out there at least four times a week, if not five. The added attention shows, and I feel good about it.

Then after coming home and doing the food preparation stuff, I set up a chair on the front porch, pulled on a sweater, and took the laptop out front to write. I started this story, “Bearing Witness,” back in January, then broke off to write “Beer Goes to War,” another story that didn’t sell, and the Uprising edits. Then I got into writing the Netwalk: Foundations giveaways and that’s been a wee bit of a time suck (especially with a story that’s blowing into novelette size). Then there’s been more edits and stuff, so I’ve not gotten back to “Witness” until now.

As always, the added time seems to have helped. But the damn thing seems to want to become a novel, or at least a novella. Ah well, it’s steampunkish or Weird Westish or something. There’s probably a market for it somewhere. I think it’s my summer noodling-about-I-need-a-break-from-Netwalk project.

I think I’m going to spend more time writing outside on the front porch. I did some work on our friend’s porch last Sunday and that was just right. I worked outside today until I came to a stopping place and my fingers got cold.

And now it’s on to doing some housework. I’d like to get some parts of the place in order before I start taking classes!

Okay. Does this work?

Comments Off on Okay. Does this work?

This time I’m trying Quick Press, as well as a different crossposter.

Comments Off on Another test

Welcome to the wonderful world of Joyce figuring these things out.  More exciting stuff to happen once I get this figured out.

Testing, playing with the crossposting to LJ

So the changes are in progress here.  I’m working on the new WordPress journal and crossposting to LJ.  Let’s see how it works.

Comments Off on Testing, playing with the crossposting to LJ

Comments Off on testing, testing