The joys of soaking hooves

So here is the promised post on the process of treating Mocha’s feet, complete with pix.

To start with, I have a set of soaking bags prepared. It’s possible to buy heavy-duty soaking bags, but they cost around $2.50-$3 a bag. That’s a lot of bags for what I’m doing now. I’ve been able to cobble together a substitute using gallon freezer bags and duct tape. 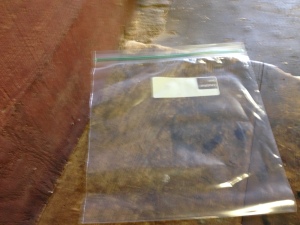 Then the first piece of duct tape wraps around the bottom.

You want half on one side, half on another, to protect that bottom seam.

After that, you add overlapping layers, about three of them. You need to have some loose space at the top to tie it around the horse’s fetlock to trap the gas that is created and fumigate the hoof. 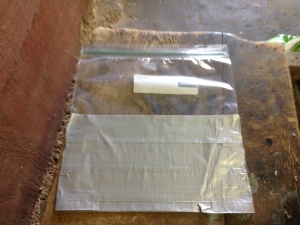 Next, you mix the White Lightning with vinegar, 2 oz of WL, 2 oz of vinegar. 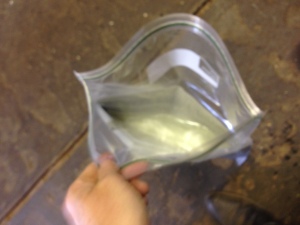 Don’t breathe it. Insert horse hoof into bag, making sure that the heel clears the duct tape with plenty of space. Vetwrap makes a nice tie. 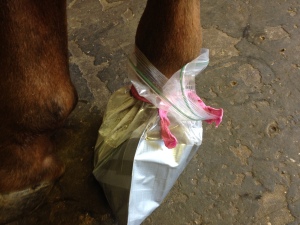 Soak for 40 minutes. You can see vapor from the contained gas in this picture if you embiggen.

And that, in a nutshell, is part of what is occupying my days of late.

Comments Off on The joys of soaking hooves

I didn’t really intend to not do much writing in the past week and a half. Last week was supposed to be when I did a lot of final touches on Shadow Harvest. But then, well, life. In short, hubby and I got hit with a nasty gut bug which is only now letting go of us. We got sick at the same time and we recovered at the same time. Hmm.

Meanwhile, Mocha’s white line disease has returned, in the same area. The farrier pointed out an area to watch and treat on Thursday–basically, the very tip of the resection that had been difficult to clean. I doctored it before I put her away. Because of being sick, I didn’t make it back out to the barn until Monday. At that time, the watch area didn’t seem too bad. I cleaned and doctored it, no problem.

Then, Wednesday. Oy. The fungus/whatever decided to take off. I scraped white crumbly stuff out of her heel area and in that toe. She was sore (it wasn’t later until I put two and two together and realized she was ouchy because we were outside). I had a few drama moments of “omg, my horse is going to DIE what am I doing?”  involving crying on her neck, worrying at the trainer (who has his own worries about it; her dam had to be put down for similar problems and he loved that mare) and so on. Meanwhile I was doing the one thing I had stuff on hand at the barn to do. I soaked her foot in a slurry of Epsom salts and iodine for fifteen minutes, then slapped a disposable diaper over it, covered that with Vetwrap, and finished with duct tape. Then I went home, regrouped, did my research, and finally caught up with the farrier.

We have a plan of action. Right now she gets a daily dose of either White Lightning soaks or a soak in Epsom salts and iodine, at least for the next few days. It has to be kept clean. Back to the diapers, Vetwrap, and duct tape. I’m to check back with him next week if she needs to be resected again because that means hauling her to Salem…

My additional pieces include turning her out or light work at the walk with the wrapper off to let the foot dry. I have to clean it out and check to see if it’s progressing, anyway, and letting her out without the wrap affecting her balance is good for her mentally. I’ve gone through something like this with my other big mare, Sparkle. Mocha is generally more settled than Sparkle was, but I’m starting to see the same light of rebellion and annoyance on her part about all these restraints. Normal, and I’m glad to see it, but…it has to be managed. She has to feel good and have a good attitude, so if that means I’ve gotta clean out her feet, well so be it.

Today, I took her out of her stall, cut off the wrapping, then turned her into the sand pen while I set up for the Big Soak. I’ve got all the bottles of stuff in a tall five-gallon bucket. The diapers. The Vetwrap. The duct tape. The wire brushes. The Epsom salts. The iodine. Dang, talk about hazardous waste.

When all was ready and Mocha had been able to wander and roll, plus snitch some grass, we started on the Big Soak. White Lightning is made from the same stuff used to fumigate fruit and vegetables. It’s inactive until you mix it with vinegar.  Do this in a heavy plastic bag, insert horse hoof, watch bubbles happen as the hoof hits the liquid. Then you secure the top of the bag around the horse’s fetlock, and settle in for a 40 minute soak.

I think the bubbles must have startled Mocha, because she got pretty dancy (for her) there at first. The gas or else her hoof cracked a seam and the bags started leaking, so I had to put two more bags over it. As the gas settled down, she settled down, and I began the Next Stage. White Lightning also comes in gel form, so I decided that I was going to treat some suspicious spots on her other three hooves.

Of course, that means wrapping those hooves as well.

Mocha was pretty patient when I started in cleaning and doctoring her feet, right up to the point where I shook out the diaper and started fitting it to that hoof. We Had Discussions. However, I prevailed and managed to treat all three hooves. I eventually had a horse with three silver-wrapped hooves, a fourth in a clump of plastic bags, and a rather disgusted look on her face.

At last I freed her from Those Bags and wrapped the fourth hoof. Foot looks pretty good. There wasn’t any new stuff today, after the first iodine soak, and no new stuff worked loose after the Big Soak. Whew. Hopefully it stays this way.

I decided that the most efficient way to deal with the plastic bags was to duct tape their bottoms. I taped about seven of those bags after I’d put Mocha back in her stall and picked up. I was on about the second or third when she nickered plaintively after rustling around the door a little bit, so I opened it about a foot and let her watch the process. She seemed to find it amusing. I just taped the bottom seam, then worked my way up about three layers, leaving the top flexible enough to secure around her fetlock. After years of watching middle school boys duct tape their folders, their shoes, and their wallets, I figured that it might work for soak bags as well. Still cheaper than buying the special-made soak bags at nearly $3 each.

So yeah. Hopefully this will turn the white line disease around. What we don’t want are complications like the main bone in her hoof rotating. White line disease is threatening because it compromises the integrity of the hoof capsule which holds that bone in place. It’s also a sneaky little fungus/bacteria (there are arguments about this detail) that can hide out in the bone and come back. That’s what has happened here. So to get it all, we’ve either got to cut hoof or attempt chemical means. This is the second stage of those attacks. There’s one more treatment after this, and it involves a 90 minute soak with a special boot. Um…hoping to avoid that.

But I’m still not sure where we’re going from here.

Comments Off on Yikes. Life.