A busy, busy week. and Jingle Through Joseph Bazaar

We’ve had a whirl of social activity in the past week. Last Thursday we drove from Enterprise to Portland, and met up with old-time friends at a local hotel to talk–haven’t seen these folks for almost twenty years, but we were able to pick up just where we left off from then. Sweet.

Then Friday was lunch with former colleagues of the hubby, followed by Orycon and intensive socialization, panels, and social, social, social until Sunday evening.

Monday we went down to Clatskanie to harvest garden carrots, beets, cabbage, and some other stuff. The mild beginning to winter is a blessing because we still have a lot of carrots in the ground. The hubby and our friend S went out and found some chanterelles–not many but they were big and meaty.

Back to PDX on Tuesday, dealing with errands, errands, errands on Wednesday. I got to have a drink with a teacher colleague and talk shop for a bit. Then back to the PDX house for Thanksgiving dinner with the son.

After a quick brunch this morning, we set out to return to Enterprise. I have a craft show on Friday and Saturday both this weekend and next weekend, where I’m hoping to sell books and jewelry and other assorted art stuff. I was hoping to have time tonight to go set up so I wouldn’t have to rush around as much tomorrow.

The drive didn’t start out all that well. Driving hard rain in Portland, coupled with wind as we went further up the Gorge. ODOT has resurfaced a lot of I-84 between PDX and Hood River this summer and boy does it make a difference in managing the puddles that pop up during a hard downpour. All the same, the rain and wind played havoc with the Outback’s usual good mileage. While we got out of the rain by The Dalles, we still had a hard wind hitting the passenger-side front corner of the car, which is just about the worst for mileage and weird little gusts that make the car want to dance around the lane. On the other hand, I love seeing the desert and plateau country in this sort of desolate, cloudy, early winter mood. No snow except above about 5000 feet in the Blues, and the hillsides are green with fall grass. Grays and blues reflect back the brown overlaying green of the ground.

Traffic really got light after we passed Pendleton and started climbing Cabbage Hill. I didn’t mind that one bit. It’s nice to have the interstate to yourself once in a while, and Thanksgiving Day is a good day to be traveling away from urban areas.

We didn’t see any deer or bighorn sheep or elk on this run, at least not until we reached LaGrande. But the wind appears to have all the mammals looking for cover, and given the amount of green we saw on our drive, I’m betting that sheltered feeding grounds are readily available. We did see whistling swans on the Columbia, as well as snowy egrets.

Finding food was a bit of a challenge, as all the fast food places were closed when we reached LaGrande. Safeway was open so we got hot deli food and drove on. I wanted to have some time to get my table set up for the craft show tomorrow, so I bugged out of unpacking and took off for Joseph shortly after we got home. It was probably the quietest the place will be until Christmas. Only Our Little Store, the Hydrant, and the Community Center were open. But the Christmas decorations are up and the Main Street shops could give downtown PDX a run for their beauty. If I’d been thinking, I would have taken my camera and gotten some pix.

But of course, I was like the other tired crafters setting up at the bazaar, making a list of stuff I’d forgotten and stuff I need to change out tomorrow morning. The culture hasn’t changed that much from when I was doing craft bazaars 18 years or so ago. Similar jokes, but the difference is just what’s locally available. I’m getting back into some different sorts of art and craft stuff from what I was doing in the 90s, so we’ll see how that plays out. I am happy to have that part of me back again…and I am also selling books at the table as well.

This year I’m only doing two weekends. Next year…I want to do more. Which means I’ve got to figure out what the local bazaars are, when, and where.

But right now I’m going to find out more about this bazaar, this year. It’s all a process.

Comments Off on A busy, busy week. and Jingle Through Joseph Bazaar

So here’s the Orycon schedule for this coming weekend. BTW, I will be giving away a lanyard and an eyeglass chain at my reading at 5:30 on Friday–handmade by me!

Comments Off on Orycon Schedule

After a tumultuous last few weeks, we took some time away to cruise up the Lostine River into the Eagle Cap Wilderness. I’ve been wanting to go up there for some time, and it’s close enough for a short afternoon drive. So DH and I took off about 1:30 and headed up the river. We hadn’t gone far before we spotted a small herd of elk. No bulls except for a single spike. 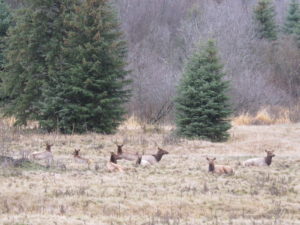 Then we gained altitude, until we reached the Lostine River Canyon overlook.

We drove almost to the end of the road, deciding that we need to come back during other seasons to learn more about this part of Wallowa County.

On our way back, we checked out a state wildlife refuge. It’s a winter feeding ground for deer and mountain sheep. We parked and hiked up a road to gain some stunning views. 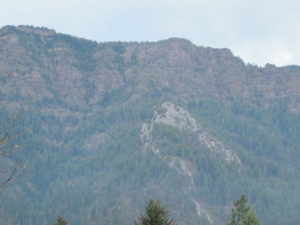 And while we didn’t see any mountain sheep, we saw four deer, including this guy.

A nice day all around, especially since I’ve finished up edits on Netwalking Space.

Comments Off on Lostine River drive