Update…and one of those sweet June nights

It’s been a busy time since the end of April. I took on some new volunteer activities–writing and community-oriented. But I was also just trying to get back on track with a bunch of other things that were going on besides writing, like changing seasons, and–I don’t know. Just plain dealing with stuff and maybe burnout. I don’t know. Another factor was that I fell behind in getting Netwalker Uprising edited and uploaded, which has rolled over into the next Netwalk Sequence book, Netwalk’s Children. Fortunately, Children shouldn’t be as difficult to deal with as the previous books.

And June has been all about woodcutting, and morel hunting–we now have a gallon and a half of dried morels, with the season probably spluttering to an end.

It still doesn’t explain why I’ve not been so productive lately. Though a probable reason has presented itself–an eye examination revealed that I may be developing glaucoma, and that I have a cataract that needs to be assessed. Now that’s entirely probable as a cause for why it seems to take longer–eye focus issues and the like. Eh, it’s probably all multi-causal.

Meanwhile, tonight was one of those horse girl dream moments. There are times that I think I’m regressing back to my teen years with horses–only with a better quality of horse. Mocha’s summer pasture has a corner section that she doesn’t spend a lot of time in when she’s by herself–she has an old friend from past summers over the fence, and he fusses when she is out of sight. The two of them are sickeningly cute at times–Blue starts hollering for her when I pull up, even before I catch Mocha. And when they’re together, they’re nuzzling and touching. I don’t see her doing that with a lot of horses. She’s usually standoffish. So he’s a definite if demanding but trusted friend.

But she’s also willing to spend time with me, and if I hang out with her in that corner pasture, she’ll graze for a while without fussing before she wants to go to her buddy. If I’m on the ground, though, she’s more antsy and worried. Tonight, I thought I’d try sitting on her back and see if that made things any different.

It did. She grazed with me sitting on her for a good forty minutes, not fussing, just calmly moving around the field. And I indulged myself in behaving like a teen girl with her beloved horse. Just sitting on her, looking around, watching her graze. I even lay down on her back for a bit. Not necessarily something I could do with the broncs and half-broke greenies I rode as a kid!

Mocha didn’t fuss, either. She just settled in for a nice graze.

One big difference between her and the horses I had as a kid is that she doesn’t cruise the field eating nothing but the seed heads off of the grass–a good thing in a year like this one with lush pasture. Both my pony and my horse did that, and developed founder as a result. I have to wonder if that was due in part to grain being a much more significant part of their diets all their lives, as opposed to Mocha. My parents bought sweet feed, and that’s what the horses got. They had a greater taste for grains.

Mocha has primarily had pelleted feed or straight oats as a low-dose supplement to forage, often more as a side dressing for supplements than anything else. Hay and grass have been her primary feed all of her life. When I think about the amount of feed I’d scoop into a coffee can for my horses when I was a kid, I shiver now. Recipe for disaster.

But Mocha? She likes her pelleted feed, which is primarily beet pulp with other additives. At most, I’ve fed her two pounds once a day, rather than the 7-10 pounds recommended for horses of her age and weight.

She just won’t eat that much of her pellets unless she gets it several times a day, and I’m not sure she’d eat that much even then. She just loses interest after a pound and a half to two pounds.

Last summer the barn owner told me about a recommendation for feeding Strongid-C–a feedthrough dewormer–to senior horses, not just for deworming but to help build up topline and improve weight retention. I started doing that last August–and within a month, I noticed a big difference. She was less tense. Filled out more. And, most interestingly–she wanted less grain. Right now, with fresh, rich grass, she’s getting a half-pound to three-quarters pound of her pelleted senior feed. She looks better than she has for years, her coat is glossy, and she has more energy.

Now when it comes to grass, she’s a connoisseur. She spent two springs on a field north of town, in prairie country that still had some bunchgrass and other native plants. The second spring we put Mocha on that field, she took two steps off the trailer. Then her nose went down and she started grazing. I don’t think she came up for air.

I started hand-grazing her this spring as the grass started coming in. One thing I noticed is that at some point, she will choose grass over hay. But she doesn’t gobble all of it, as I saw tonight. She grabs several mouthfuls low down on the stem, then chews them. Often she’ll press her nose to the ground, and might even start sniffing. Not sure what that’s about, but it’s clear she’s using scent to identify certain desirable grasses.

And it was a quiet, peaceful evening. Fluffy clouds in the bright blue sky, casting interesting shadows on the mountains that still hold a bit of snow. Just sitting on a good horse’s back, chilling and relaxing together.

Day after solstice, and it was pretty darn nice. 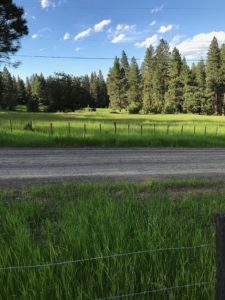 Comments Off on Update…and one of those sweet June nights