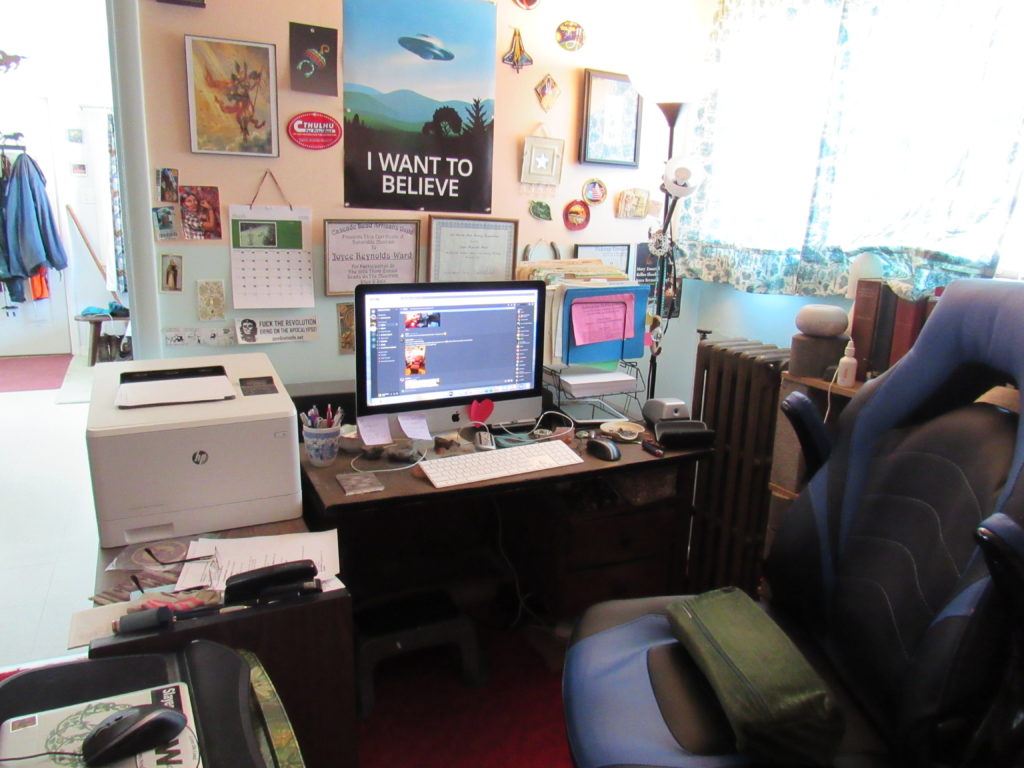 It’s been a week. I’m surprised at what I’ve been able to accomplish, given that we had one power outage, I had multiple Zoom meetings this week, there was a farrier appointment where I ended up holding someone else’s horse as well as mine, and oh, I don’t know, a further continuation of the Month of Dread going on.

One of the Zoom meetings was pretty useful–a organizational class aimed at writers that was, for once, created by a neurodivergent person using some useful notions and structuring that differ from the neurotypical “this is how you get organized” structure. The others were either hosting or organizing a monthly podcast.

The organizational class had several good things that stood out to me. First of all, this person (Paulette Porhach) redefined “getting organized” as self-care. Instead of saying “I’m organized,” she suggested saying “I am taking care of myself by being organized.” I thought about it a bit, and wished I had that perspective when working with some of my ADHD middle schoolers. I think that reframing might have made organizational structures more palatable to them. But she also was talking about focusing on the future, biting tasks off into smaller chunks (that’s not new), working backwards slowly (that’s new) and other good things, including creating central electronic and physical locations for organizing information, making it easier to do next time around, creating systems that YOU can trust, not being afraid to adjust and replan when life strikes, and having a weekly executive meeting with yourself.

Interestingly, that last bit was something I had tentatively already started to do, beginning last week. I had decided I needed to do a weekly publication progress plan. Today, I expanded it further to taking notes in my spiral notebook about what did and didn’t get done this week, plus forming a plan for the week ahead. I already do that somewhat in my weekly planner, but writing it down really helps. I also am thinking about writing an updated resume for myself. Not because I’m looking for work, but because I think it will be useful for me as a sort of psychological boost to chronicle everything I am doing to help my assorted communities.

One thing I stumbled across is that when I did my revised 2023 long bio, I separated it into several widely spaced paragraphs. This became useful in a couple of instances this week when I needed to use portions of the full bio but not the whole thing.

So. What did I accomplish in the past week?

–Began drafting Federation Cowboy and finished a five-episode first chapter. That gives me almost two weeks worth of episodes (posting 3x a week). However, the story has changed somewhat and I needed to redraft my working outline. Otherwise, I might have been able to start uploading this week (I prefer to have a two-week lead on serial publishing, just in case something happens). That said, another chapter will give me that cushion, so I hope to start uploading toward the end of the week. I already have a Vella cover. I may tweak it some more, but for now, it’s ready to roll.

I am discovering that phenomenon when writing in a new world, where I have to stop and think about the worldbuilding and just how much information to feed into the work. I’ve been spoiled by working for three years on the Martinieres, where I had easy access to what I knew about the world. In this far-future world with Converted (raised to sentience and cross-species communication) species, I had to stop and think. What kind of names would birds give themselves? Cattle? And then I had to cut out a whole section of writing because while it was useful and helped me understand the world, it just. didn’t. work. for the story. Oh well.

–I finished the production of A Different Life: Now. Always. Forever. ebook and print interiors. Now I just need to write the final blurb, create the paperback, create the promotion campaign, and get it uploaded for preorders before the February 7th release.

–I backed up almost all my photos (forgot to do the promotional photos on the desktop itself) and Dropbox files onto my new external hard drive that is compatible with the MacBookAir’s USB-C ports. For the first time, I actually can access my current photo catalog on a laptop. That’s huge.

–I revised and submitted a new short story (which has received its first reject, from Clarkesworld, which is not surprising–they’re fast and it was a long shot to get sold there anyway). I now have eleven short stories in circulation.

–Both of my other meetings were productive and useful, and I’m glad I’ve started note-taking for a lot of this stuff in a spiral-bound notebook. I have a lot of these, left over from teaching days and my own college days in the Master’s program. Some kids kept their spirals that I provided for journaling, others didn’t. Rather than throw them out, I discarded the kid writing. I can write what’s included in the notebook on the front cover when it’s done, and meanwhile, recent stuff is handy where I want it. That’s where I did my executive meeting notes.

What didn’t get done?

In one word, PROMOTION. That’s the biggest hole in my writing business. I did small things, but I did not get a lot of the visibility work completed that I need to do to promote my backlist. Or what I have coming out.

I have some notes about what I need to do on that front this coming week. Fortunately, I don’t have as much to do with meetings and horse stuff. Farrier always eats up my entire morning, no matter what.