Seriously, what I realized (DUH!) was that I could get a better picture of the hoof by reversing the screen on the iPhone. 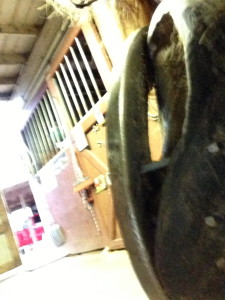 The good news is that Mocha is still willing to be cautious with the new shoe. She’s not offering to move out of a walk, so I think she doesn’t want to put pressure on the foot. She’s been off of Bute since last Wednesday, but she’s not showing any signs of distress or pain, which means I’m not really willing to medicate her. At this point in time, she needs to be able to get the feedback to keep her from squirreling around or wanting to get more active than she should with this shoe.

That doesn’t mean she’s not active!

The Girl will like that. She was grinding her teeth last night during the ground driving. Granted, I was increasing the challenge for her, working closer and calling for more precision, and developing more specific whip cues. She got frustrated a couple of times, especially when I asked for lateral work in a different form from what she’s accustomed to doing on the long reins (zigzag in the middle and on/off the rail instead of straightforward two-track along the rail).

The tooth grinding lessened when I rode her, though she was still grouchy because I’m asking her to carry herself a bit more on her hind end rather than putz around on a long rein. So I think alternating ground driving and riding will be a good thing. It’s going to be pretty much daily for a while, because I have to attack that open part of her hoof with a wire brush to ensure that it stays free from any further white line incursions, followed with an antifungal.

The joys of horse management. And so, we continue onwards….

Comments Off on Some new Mocha hoof pix