So Miss Mocha has been facing challenges with her hooves and her soundness of late. Today, the farrier came out and issued a verdict: white line disease. While there are several options for treatment, the best one for The Girl in my opinion was a mechanical treatment (there are chemical-based applications which people Swear By, but my experience with those has been that I prefer to save those options for a fallback).

What is white line disease? OMG, that’s something that horsepeople can and will debate endlessly to determine just when a case of hoof rot cascades into something more extreme. Essentially, it’s like getting fungus under a toenail…only the toenail is something that you are walking on. Constantly. It’s a fungal invasion of the soft tissue between the outer wall of the horse’s hoof and the central core of the hoof and sole. Farrier has his own solid opinions (as do most horsepeople), and, frankly, he trends conservative on this subject–as do I.

So. Before The Farrier visual: 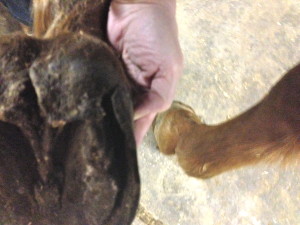 That dark crevice by my thumb is the area of white line disease. Note that the material that is supposed to be there…isn’t. 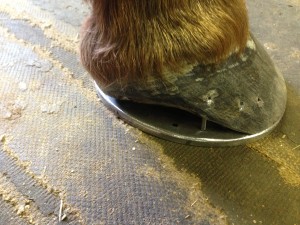 The infected and diseased part of the hoof is removed and a bar shoe nailed on to provide support. 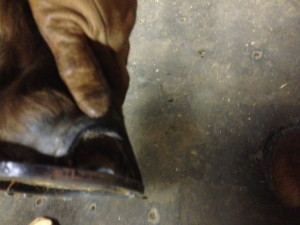 In order to keep Mocha from pulling off this special shoe, which provides heel support for the cutaway portion of her hoof, she has to wear a bell boot over the hoof.

More later, but…it’s not as painful as it looks. Mocha was relaxed and drowsing throughout the process, with only a horsey aspirin equivalent. She’s looking much more chipper tonight. I’m guessing the shoe is already providing some much-needed relief.

Yeah. Stuff happens with horses. Such is life.

Comments Off on Adventures in farriery