Getting out and about

Yesterday when driving back from a ride and visit with the old mare, I suddenly had the thought “it’s nice weather and gonna be for a few days, so maybe it’s time to take a drive.” Easy enough to do here, where it’s possible to get out and see stuff but not go much more than forty-fifty miles.

Great minds think alike because that’s what the husband suggested when I got up this morning. Now, being on the older side, that doesn’t mean that we got out of here all that quickly–needed to pull things together before we headed out. But soon enough, we were off for a short cruise around the County. After the morning visit to grain the old mare, give her some attention, and provide entertainment for the horse herd, we were off. We headed out the Zumwalt hoping to get out there and see some critters.

Well, we saw some hawks. I took some pictures with my camera setting on artistic shots–like the one above of the Seven Devils.

And then we encountered THIS.

I didn’t take the pic from very close because as soon as we saw that first big drift and no tracks past it, we KNEW. Before I could jump out and take a pic, husband was backing the truck. So this is a very long range zoom shot. The drift in question looked to be about three feet high, and since we’re a.) old and b.) the closest house was ten miles back on the road and c.) we’ve done our share of getting stuck and having to walk out and we’re (see a).

So we turned around. On the other hand, on the way back, we spotted these big boys. 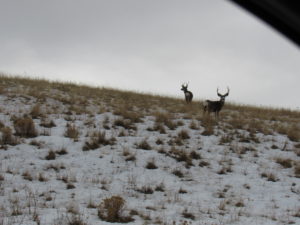 They know it’s not hunting season.

So we cruised around elsewhere. Spotted two big family groups of bald eagles, ranging from first years to full adults. But also spotted a small flock of pheasants–two roosters and three hens. Encouraging to see. I hear those roosters crowing all the time when I’m riding Mocha on the roads, so it was cool to see them in a group. For some reason, vehicles don’t spook them as much as a horse and rider seems to. I’ve seen those roosters drop to the ground and sneak along at a pretty good clip.

The other piece was considering just how to represent the somewhat different relationship between Gabriel and Philip Martiniere in that book. Power is the story where they end up collaborating against someone worse–but Gabe has to look really hard at himself and what he will and won’t do in the name of power. Not sure what that’s gonna look like, but I’ve decided that serials are where I let my pantser flag fly (as opposed to something I’m not serializing).

Anyway, it was a much-needed break, and a nice change from driving to Portland to do medical/family stuff.

Comments Off on Getting out and about