Playing around with cover images and editing–Life in the Shadows 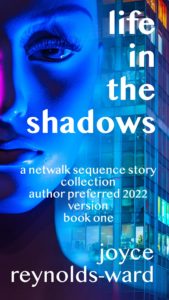 So I’ve been playing around with the Shadows cover, besides working on edits. Running the current cover through Mockup Shots revealed that the first two versions had text running too close to the edge.

Welp, back to the Power Point editing process. The first picture is the current cover, with the addition of “Book One.” I also decided to stick with lower case for my name, because it fits the whole thing.

Edits are progressing in the story, quite happily so. I pulled in snippets from some worldbuilding, unpublished vignettes I wrote before releasing Netwalk’s Children because I was doing a pivot with Sarah’s personality between Netwalk and Netwalker Uprising. Now I’m working on editing the whole thing in Shadows to reflect Sarah’s deterioration before her death, and hopefully foreshadow what happens to her daughter Diana in Netwalking Space. Sarah and Diana are meant to be warnings to their descendants Melanie and Bess. Plus I noticed some huge continuity bloopers in the side short stories–I’m using what I learned from the Martiniere Legacy to deal with those issues (though yes, there are still continuity errors in the Legacy, darn it. Nothing as huge as in the Sequence, however. And the Legacy is also spinning off its own separate worlds–A Different Life is going to be at least two stories of how the Legacy could have taken a different path, and I have notions for at least two other versions. Will I write them beyond the ADL stories? I don’t know).

I may still play around with this cover–it’s a “wait and see” thing. But the discovery that Mockup Shots works well for discovering–well–one little glitch in formatting–is very helpful.

However, I’ve made a major decision about series reordering. Life in the Shadows is now Book One of the Netwalk Sequence, not just a story collection. Because it incorporates the already-published, already-available Winter Shadows and Shadow Harvest (as well as already-published short pieces), I’m still calling it a collection. But there is going to be new material, doubling the book in size, starting from when Sarah issues the ultimatum to Diana to break it off with Will Landreth or else, proceeding right up to the opening of Netwalk (and a little beyond). It’s not the full sequence of events because that would be a much longer book (and it’s already pushing 105K, plus it covers about thirty years of events). However, we get to see snippets of the relationship between Sarah and Francis Stewart. We see Francis’s betrayal of Sarah. The capture of the Gizmo happens in Valentine Disruptions. A mirror version of Sarah’s ultimatum to Diana happens between Diana and Melanie–that’s in vignette form, though I may expand it.

Release date will be sometime between March 15 and 25, depending on editing processes, and it will be available wide. I will be taking down the current version very soon.