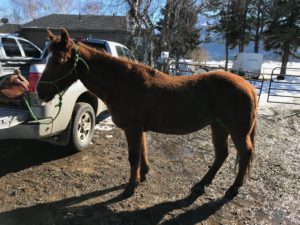 The old mare is still cruising along pretty well these days, with her 21st birthday coming up this next week. She’s holding her weight and staying pretty active. I’ve had to keep an eye on her muscle tone and it looks like she needs to be getting bodywork 2-3 times a year. But Mocha’s still a pretty nice saddle mare, energetic and good for a nice long ride once she gets legged up and in condition. I’ve had a chat with the farrier, and we’ll probably be looking at pour-in pads for her in late summer when the ground gets hard. She had a difficult time this winter because we had a long spell of frozen ground with no snow to cushion, and that’s hard on her these days. That’s what sparked my chat with the farrier. Not much else to be done. We know she has thin soles. Sickle and cow hocks, which does wonders when you ask her to stop hard and fast, but can cause arthritis issues–which is what she has.

But. She’s still the same feisty, energetic Spring Mare she’s always been. I’ve taken to riding her on the gravel roads again because they’re better footing than the pasture–no ice, and muddy with a solid surface underneath. She’s been wanting to run hard in preferred stretches, and kinda getting heavy on the bit about it. So today she got put back in the curb for a while, and I ended up with Grumpy Mare.

Mocha listened, though, albeit being grumpy about it. Another sign of Spring Mare.

On May 1st she’ll have completed six years in Eastern Oregon, living either in pasture or pen 24/7 instead of being a Stall Princess. It seems to be the best thing I could ever have done for her. Mocha prefers to be in pasture to being in a stall, and blanket? The only blanket she seems to like is the quarter sheet I put on her when the temps are under 40 degrees. She’s gone through winters at -20F and milder ones. 2 feet of snow. As long as she gets hay daily she doesn’t seem to care about the weather.

Here’s a pic of her after today’s ride. She’s still heavy-coated and works up a sweat, but it doesn’t seem to bother her.

And yes, she’s muddy from the roads. Given that she’s living in snow and mud, welp, not too excited about it.

Here she goes back to her herd.

Comments Off on Old Mare at almost 21