Inspiration on the Road

I’m not sure how or when this mode of inspiration started. Perhaps it hearkens back to my childhood years, when my parents made weekly trips to their favorite fishing reservoir in Central Oregon—a two-hour drive. I’d look out the windows and daydream about riding a horse along much of the terrain (as young horsewomen often do). Later, I imagined a lot of what would now be called fanfiction, only most of mine centered around the main characters of The Name of the Game tv series.

In later years, those settings we drove by inspired stories. A rock formation might catch my fancy and I’d kind of play with ideas taking off from that notion. Or I’d see a clearing—a grove of trees—something that might kick off an idea.

It might not always be explicit in my work, but a LOT of what I write has a setting as a strong base element. Even if it’s buried in the rest of the work, the odds are very good that when you read my fiction, nested deep inside the story is a location that triggered a metaphor. A particular mood. An image. Something tied to what I’m working on, or trying to create, as the case might be.

Driving certainly has played a role in my latest writing career incarnation. When I started creating fiction again, I was teaching at a small rural school forty miles from my house. I got up at 4:30 am to work on my writing, then spent the drive to work listening to music and thinking over what I’d written that morning. Hashing out problems with the story while driving simply became part of the process, because I had a lot of time to myself, with music.

Retirement and spending a lot of time in a place three hundred plus miles away from family and friends meant that we were on the road a lot pre-Covid. Once again, I had lots of time behind the wheel to think as the scenery went by. Sometimes I had the time to capture the ideas. Other times, they flitted away. But I do have notes in my journals, and there are kernels of story ideas just waiting for me to breathe life into them.

The Martiniere Legacy is probably the one set of books that doesn’t have as much travel linked to it, simply because much of it has been written during Covid. And yet. Short drives around the rural countryside. Working in the woods to gather firewood, mushrooms, and huckleberries. I still got out and still spun ideas based on our drives.

I most recently used this process to build a short story, Red Running, set in the Martiniere Legacy world and crafted for a specific anthology call. I’d wanted to create something inspired by the Neil Young song “Powderfinger” and had a kind of idea about what to do with it. But—nothing was really stirring.

It was a nice, sunny day. The husband and I realized that one of our vehicles, the Subaru Outback, had not been driven for a month. In this land of rural life, we end up using our big pickup as the daily driver because the regular trips are to the ranch to do things with the horse, hauling wood, and hauling garbage to the dump. Not really activities for the Outback, especially since we haven’t gone to Portland for over a year now.

We decided to drive down to the Imnaha River and then up the canyon as far as it had been plowed. A nice outing, socially distanced, and while part of the road was off-pavement, it was well within the Outback’s capacity. Plus, since the Imnaha is about two thousand feet lower in elevation than where we live, we thought we might see a hint of spring. We’d definitely see wildlife of some sort or another.

Once we were down in the Imnaha, listening to the String Cheese Incident, the story started stirring. I knew this was going to be a dark tale because “Powderfinger” is not exactly a sweetness and light song (essentially, it’s about a young man in an isolated river area who sees a threatening boat coming up river for nefarious purposes, and since he’s the only one able to defend the home place, takes a shot at the boat—and is killed).

The main character, Chrissie Lee, made herself known pretty quickly. Chrissie Lee is young, and has bought into a toxic ideology that leads to her death. Given the constraints of the Martiniere Legacy and what I’m working on with the Alvarez Armory subset of stories within the Legacy, she’s worshipping a set of narcissistic leaders. She’s also involved with some nasty biotechnology.

Between viewing fields of cows with newborn calves, cattle waiting for their daily hay feeding, spotting deer, elk, bald eagles, golden eagles, and a host of other raptors (plus multiple artsy landscape photos), the foundation for Red Running fell into place. 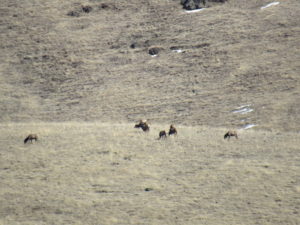 Eventually we reached the end of the plowed road. It happened rather abruptly, as the road and the river both rise into National Forest land and higher elevations.

I thought more about Red Running as we listened at last to Neil Young on our return. And even though Red Running is set in Northern Idaho and not the Imnaha, in my mind it’s still going to be the Imnaha I see when I think about that story. Which is…not unusual.

If Red Running gets accepted for that anthology, it will come out in November of 2021. Meanwhile, the book most closely affiliated with that story, Broken Angel: The Lost Years of Gabriel Martiniere, will come out in late April/early May of 2021. Martiniere Legacy stories are available on Curious Fictions and through Amazon, Barnes and Noble, Apple, Kobo, and more.

The Legacy is very much a set of near-future Northeastern Oregon stories. But that’s another essay.

Comments Off on Inspiration on the Road