Whew! Sorry for the long delay in getting back to posting your twice-monthly FREE dose of Netwalk Foundations, but a web hosting change and other stuff kind of got in the way. But here we are, “Of Boyfriends and Mothers and Daughters, Oh My! Take Three.” 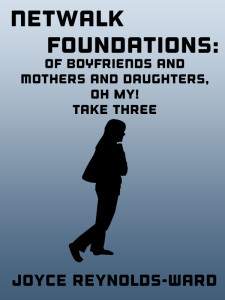 Further business note: The three Daughters stories will be published and sold under one cover in December as Netwalk Foundations: The Daughters Cycle. Additionally, I am working on a long-form Foundations story, Problems at the Andrews Ranch, which will come in at novella length. It will go up for sale in December as well, and be serialized in three parts starting in December.

Foundations will also go to once a month for the months of November and December to allow for holiday distractions.

But we’ve got some good stuff on tap for you to read–a vignette with Sarah, Francis Stewart, and Anne Whitman illustrating that triangle at the end of Sarah and Francis’s relationship; an early-early segment with Will and Diana that I wrote during the 2013 Columbia Center for the Arts Plein Air Write Out in Hood River; and a short piece between Netwalk: Expanded Edition and Netwalker Uprising featuring Angela and Nik.

I am also starting work on Netwalk’s Children in a few days and hope to have the first draft completed and to the editor by December. So good things are coming.

Comments Off on Netwalk Foundations–back at last!