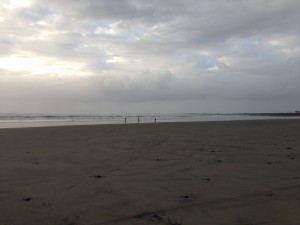 One of the things that our friend S has been talking about doing is checking out digging razor clams on a late afternoon/evening winter low tide. The combination of weather, lower tides, and timing seemed to be just about right yesterday, so we joined him on an expedition to the beach near the wreck of the Peter Iredale to dig clams.

If clams could be found, that is. It was a blustery, stormy day with a couple of rain squalls blowing through and a constant wind that made it hard to identify clam holes. We poked around on the beach for about three hours from 3 pm on, following the tide down while we could see, then going back up closer to the pickup to look for clams using lights.

One clam. It wasn’t the usual firm summer sand underfoot, either, but a softer, more saturated sand that slid away from under heels if you stayed in one place for more than a few seconds. I got vertigo staring at the water-saturated sand after dark and had to spend more time studying the surf–despite the dark and the clouds, the moon above the clouds kept things well lit.

The wind was also stiff enough to push me a little bit, and a couple of times when the surf came up, even though it was calf-high it was still pretty strong. I kept a sharp eye out for sneaker waves just because of the mood of the ocean this time of year. Didn’t get too cold, but I was wearing my ski base layers underneath heavy jeans and a sweatshirt, plus a vest and a rain suit added to my tall boots.

At one point I did get a lovely shot from a sunbreak, early on: 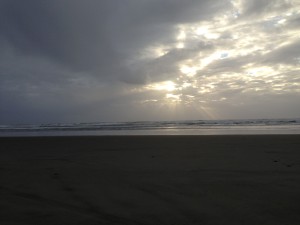 Afterward, we stopped at the Pig n’ Pancake and I had lovely gluten-free blueberry pancakes with blueberry compote and bacon. Yum.

We’ll try this again, but maybe not on such a windy day!

(on the Oregon coast, in winter, yeah. Riiiight.)

Comments Off on Clamdigging at dusk