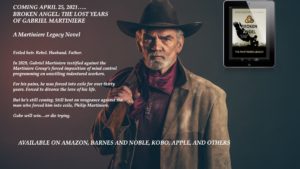 Well, we have a date. Broken Angel: The Lost Years of Gabriel Martiniere will be released on April 25th, 2021…and preorders should go live pretty darn soon.

This is a book of the heart, in part because Gabe started yakking at me and wouldn’t shut up over a year ago. As I worked on Ruby’s story (the trilogy comprising Inheritance, Ascendant, and Realization), I realized that there still wasn’t a lot that Gabe was telling me. But he was being his cagey and paranoid self, hiding everything until, oh…about the time I wrapped up work on The Heritage of Michael Martiniere. And as I started writing Gabe’s book, I realized the degree to which he really is the foundation of the whole series. Because Gabe is the one member of the Family who not only did stand up to Philip Martiniere, but is the only member of the Family who actually was in a position to stand up to Philip.

But oh, the price Gabe pays. Over and over again.

I’m not happy about the resolution of the picture in the blog post. For some reason both WordPress and Dreamwidth have it all fogged up. But it looks better at thumbnail size for social media, so…a win, I guess?

There’s more. I have rough summaries for the remaining Martiniere Legacy books.

Justine Fixes Everything: Reflections on Mortality

For years, it’s fallen to Justine Martiniere to be the family fixer. As Philip Martiniere’s daughter, she led the secret resistance against her father’s problematic management of the Martiniere Family and the Martiniere Group.

Now she’s seventy-seven, tired…and has one last fix to face. Mike, her father’s clone, is recovering from that last struggle against Philip. But he’s sinking into despair, and those closest to him worry about his mental state. He seeks answers from the family history—and Justine is the one who can provide them.

In her quest to provide diversion for a frustrated and bored Mike, Justine moves from “I’m just a fixer” to understanding the degree to which she affected and moved situations during Gabe’s thirty-year absence from the Family. She progresses from frustration at being the fixer of the family to realizing that the new era for the Martiniere Family might not have happened without her preparing the foundations for Gabe, Brandon, and Mike to reorganize and fix outmoded Family structures. More than anyone else except perhaps her brother Gabriel, she has managed to counter her father’s will—but it takes telling the stories for her to realize that.

After Gabriel Martiniere becomes the Martiniere in October of 2059, he becomes aware of the degree to which his predecessor Philip has victimized not just the indentured workers owned by the Martiniere Group but those within the Martiniere Family who did not have the power and ability to stand up to Philip. Together with his wife Ruby Barkley, he spends the final thirteen years of his life trying to repair and atone for the evil that Philip has done.

This includes ensuring that Philip’s clone Michael is raised in such a manner that he does not emulate his progenitor.

Can this mess be fixed—and what will it cost Gabe and Ruby to do it?

Runs simultaneously with the early parts of The Heritage of Michael Martiniere.

For eleven years of his exile, Gabriel Martiniere was a part-time mercenary in his brother-in-law Rafael’s security business, Alvarez Armory. Rafe and Gabe focused on thwarting the attempts by Philip Martiniere to establish a fiefdom in the Western United States, frequently by taking over small towns through swarming them with members of a Philip-focused religious cult, the Electric Born.

Even as Gabe Ramirez, Gabe makes an impression on the various people he encounters during this work. And their reactions shape his eventual future as the Martiniere.

Coincides with the “Alvarez Armory” and “In Sickness And…?” chapters of Broken Angel: The Lost Years of Gabriel Martiniere.