Bouncing back from colic 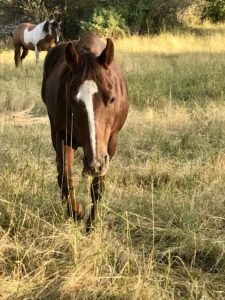 So it’s been a week now since Mocha colicked. She was doing fine before we took off on a ride, had gotten herself a drink from the trough, eaten her grain, and didn’t show any distress on saddling.

Two hours and five miles later, she was on the brink of colic, and wouldn’t take a treat, but didn’t have sufficiently obvious signs of distress to call the vet. And since she lives in pasture, there was a chance that she’d walk off whatever this was.

An hour later, she was dropping to her side, in obvious distress, and did so three times in 5-7 minutes. Her gums had not gotten to the point where they were pale white, and still showed good capillary refill. But gut sounds were limited.

Fortunately, we caught it early. Her vet gave her a shot of Banamine intravenously (pain reliever preferred for colic), then pumped some water into her stomach and did a rectal exam resulting in some small poops that were still pretty hydrated. Within a short period of time we had good gut sounds, she was reaching for grass to eat, and after being blanketed and turned back into the pasture headed off for where the hay was at a trot.

But. She’s twenty-one years old. We blanketed her because a cold, gusty storm was blowing in, and it brought snow flurries. Just a little extra care for an older horse who had just gone through a rough time. I didn’t bother trying to mix up wet feed for her because I’ve learned by experience that she doesn’t care for mush unless I add sweet stuff to it and, well, it didn’t seem to warrant that level of reaction.

It took her a couple of days to start acting like herself. I started pulling the blanket in the morning because she really only needed it at night–daytime temps were okay, nighttime were below freezing with breeze.

Monday, she went to the vet for a dental exam (previously scheduled) and vaccinations. And deworming, and shoes, since her farrier works with the vet clinic and it was easy to do (she had originally be scheduled to be shod the day after she colicked but we moved the date out, on the vet’s recommendation).

She passed the dental exam with flying colors–dental work for horses is filing off sharp points that form on the molars and leveling out uneven growth back there (some horses will develop what’s called a wave, where the molars are uneven and don’t meet properly). Got her vaccinations. Since she was in the stocks already and coming out of sedation, I popped in with the dewormer and took care of that chore.

The vet is concerned that parasite load might be an issue, and suggested a change from twice a year to four times a year deworming. I’m also considering a feed-through dewormer, Strongcid-C, but thinking about it. The big concern is that we just don’t have a real reason for her to have colicked, except…weather-coaster weather. But the only other time she’s come even close to doing this where I can pinpoint weather as a factor was at a horse show where a big nasty storm hit, and she started doing a colic-like fuss. But I got her back to her stall, stripped the saddle, blanketed her, and she settled with no problems, aggressively eating her hay. The other time she definitely colicked was part of a cascade of health issues tied to stress from moving, change in environment, and white line disease. She just doesn’t have a history of doing this–twenty-one years old, two definite colics, one possible developing that never went anywhere.

Stuff like this does happen with older horses, though, and it can be an indicator of decline. Or not.

Anyway, today was a week after the colic. She’s been cleared for light work. So I went out midday (after the morning blanket removal) and caught her up. When it came time to saddle her, she clearly remembered and associated colic pain with the saddle. I got the mare face stink-eye, with flattened ears and a head toss. Eased the cinch gently, didn’t push the issue.

The other thing is that I didn’t want to do a hard ride, either, because she’d also just gotten her hind shoes back on and that alters her stride a little bit.

She found a lot of things to look at during her ride. Ambled along, looking at everything, ears forward.

When we got back, she was careful about her first treat, again, clearly remembering the last time. Chewed it up, went “oh, okay, gut doesn’t hurt” and all was well.

Went back out tonight with her favorite blanket, the green one that she wore so many winters in her stall. She came to me, raised her head and stood square, in the proper position for easy blanketing. I flipped it on her back just like I used to do all those years riding with Gregg, where I might end up helping blanket 15 horses or so in the barn. She stood good and still for her blanket getting fastened, then asked for more cookies.

Apparently she wants her blanket at night right now.

Damn, I spoil this horse. But she’s worth it.

Comments Off on Bouncing back from colic