The difference a year makes in the horse’s life

Last year at this time we were two days into moving the horse from fifteen-some years of stall life in Western Oregon near Portland to outside life in far Northeastern Oregon. She was anxious, freaked out, and angry; pacing her pen, afraid of her tire feeder, and unwilling to drink from the ditch. In the arena she wouldn’t go anywhere near the pigs or their pen and she’d nearly run me over trying to get away from them. We had to stand with her to get her to eat and she was dropping weight. Not only that, she developed a short-term defiant streak where she challenged me on almost everything I asked her to do. It wasn’t until I tied her to the hitching rail and let her blow up that she finally got over that. Then we got hit with myriad health issues on top of the white line disease we’d been struggling with for a year and a half at that point. 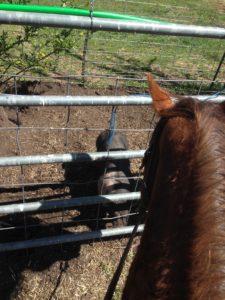 well, the image speaks for itself, doesn’t it? I took that shot from horseback. She accepts the pigs but doesn’t like them. They’ll always be an excuse for skittery behavior in that corner, but most of the time I can ride by them on a loose rein and (except perhaps on a cold and windy day) she’ll maybe tense up a little but now doesn’t even speed up.

But more than that has happened this year.

We discovered the cause for her intermittent front end lamenesses and, though we’ve still got X-rays to happen in June, it looks like the change in shoeing has addressed it.

Mocha learned not only how to live outside and drink from creeks, she learned about 24/7 herd life, surviving cold and snowy winters outside without blankets or shelters, and how to be a real horse. As well as about fences that aren’t pole fences.

Full-sized stallions no longer frighten and worry her. Today she drowsed while tied to a hitching post near a young stallion penned nearby who was screaming at her. She’s observed breeding going on, and been part of a group of mares VERY INTERESTED in one of their own who just foaled in the pasture.

Overall, things are good now. And that’s the way I like it in horse world.