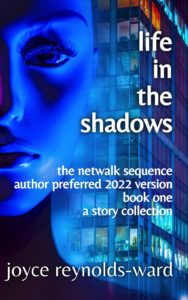 Well, after finishing up the edit for Shadows, I scampered right back to the Martinieres. Can’t help it, they’re a nice antidote to some of the foundational darkness of the Netwalk books, and allow me to explore some political themes without being painfully explicit. On the other hand, I like this version of Shadows much better than the original edition. I think it reflects the foundational premises of the Netwalk world much more clearly than the first version, and honestly deserves to be called the first book of the series.

I was on a Weeknight Writers panel about Civilizations and Conquest yesterday, and the discussion (and subsequent followup on Discord) stirred some thoughts about how I handle near-future writing. I realized that I’m not really projecting our current world in my near-future work (how can I, if I provide actual dates?) but am chronicling points of divergence. This holds true for all the Martiniere worlds as well as the Netwalk world (no alts want to pop up there. Not sure if I’m relieved or worried. On the other hand, the Martiniere worlds provide plenty of divergent points to keep me busy for a very long time. But! Things will not be all Martiniere, all the time. Besides the Netwalk releases, I have other short projects to get out, and then the new Goddess’s Vision series, which is simmering right along, thank you very much).

It’s safe to assume that every single one of my near-future science fiction stories is based on a point of divergence from our real world history, and go from there. Maybe I need to start putting disclaimers on those stories.

In the mainline Martiniere Legacy series (call it Martiniere Prime), indentured servitude became a spoken and actual reality sometime in the mid-’00s. Not something you’ll find in any of the stories, because that’s just my headcanon. I might even mark the point of divergence of the main series from our world as happening sometime in the 1990s, about the time that the internal family battle between the eldest twin sons of the Martiniere at the time, Louis, became dangerous and destructive, both within the Martiniere Family and the Martiniere Group. Saul and Philip’s battle for dominance threatens to shatter the centuries-old structure of both Family and Group. It’s only somewhat settled by the births of Gabriel and Joseph in 2001, in that nasty little twist where Saul and Philip reluctantly agree to bring up each other’s firstborn sons, born to their respective wives–all done through IVF, thoroughly documented processes followed up by DNA tests of both boys at birth. Gabriel is the son of Philip and Angelica, Saul’s wife. Joseph is the son of Saul and Renate, Philip’s wife. The agreement is that both boys will be told about their true parentage at age sixteen. That doesn’t happen in the mainline Martiniere Legacy because Philip reneges on his agreement and brings about the death of Saul, Angelica, and their daughter Louisa through a plane crash, when Gabriel is twelve. He then–unsuccessfully–attempts to sway Gabriel to his way of thinking.

While climate change is an issue in the mainline Martiniere Legacy series, the Martiniere mind control programming, especially the versions forced upon Family members and unwilling indentured workers, is much more dominant. It eventually leads to the creation of digital clones capable of surviving after their originating personalities’ deaths, and there will probably be more stories further on about the chaos that results from that mess (consider Justine Fixes Everything: Reflections on Mortality, to be an introduction to those eventual stories–along with The Heritage of Michael Martiniere.)

The first alternative Martiniere series, A Different Life, was kicked off by speculations within the current Martiniere Prime work-in-progress, Repairing the Legacy. There’s going to be probably about three books in Martiniere-ADL, all based on a point of divergence where Gabe’s family was not killed in a plane crash in 2014. But Martiniere-ADL will have climate change as a stronger dominating theme, past the first book, A Different Life–What If? So far, I have two more, perhaps three more stories thought out in that world. What If? will release in April, and all those Martiniere-ADL books will be tagged with A Different Life in their titles. I’m currently working on a story about Ruby’s friend Linda, a peripheral character in What If?, and have a notion for a story about Gabe’s sister Louisa and her love Remy Trask, as well as a story about Justine and Donald’s daughter, Marguerite, who becomes the first female Martiniere. In the ADL world, that is.

But there are more possible divergences in Martiniere Prime. What happens if Gabe tells Ruby who he really is before they marry? Or if he is killed in that fateful confrontation with Philip before the events leading to his and Ruby’s divorce? Or if he survives–but Ruby figures out who he is just before the meeting, and things blow up? I’m not sure about those stories, but I’m playing with the notion that Gabe-Prime becomes a dreamwalker in his last years, leading up to his becoming a digital clone. Martiniere-Dreamwalker stories may end up being those digital clone tales. Not sure about it yet. There’s also the faint possibility that these are just elder fantasies and wish-fulfillments on Gabe-Prime’s part as he ages. It’s something that’s simmering away. At the moment, though, the only definite alt series is A Different Life, with different branding. Here’s the cover for What If? 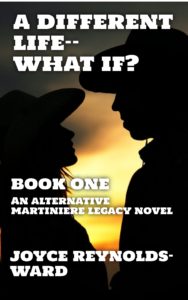 Netwalk is much simpler. It branches off from our world in the 1990s, starting with the ascendance of a Trump-like political figure in the late ’90s who destabilizes the US at the same time that the USSR is falling apart. Corporate rule becomes much more explicit. Climate crisis is still happening but it’s an undercurrent. The political unrest is real, and there’s a lot more nation-state battling both internally and externally. Think the current state of affairs, moved forward about twenty years. There’s a sense that multinational corporations are the only somewhat stable political entity out there.

Netwalk world in 2022 is definitely darker, with a lot more going on. Somewhere in this time period, limited nuclear war happens. I projected the Saudis–later overthrown–as taking over the oil-producing parts of Southwestern Asia and North Africa, to the point where it has the label of the Petroleum Autonomous Zone after one heck of a bunch of fighting. Development of drones accelerates and is much further along in the world of Netwalk 2022. The US, China and Russia are fragmented entities, limping along and torn apart by internal struggles brought about by climate change, limited resources, and pandemics. This allows for corporations–multiple multinationals–to become more dominant. Corporate leaders frequently become corporate leaders. And then the arrival of the Disruption Machine stirs up even more chaos, as it circulates around the world randomly killing cities.

Shadows chronicles the prelude to the Disruption Machine’s arrival, followed by the aftereffects and the rise of Sarah Stephens to power. Sarah is an immortality seeker–somewhat like Philip Martiniere in the Martiniere books, only more rational–and figures out a way to continue her influence and power after her death. But while she starts out sane, her indiscriminate use of nanotechnology to maintain a youthful appearance and fight off the effects of aging backfires on her–big time.

But the other factor is that Netwalk was born of the late ’90s and early ’00s, and to some degree reflects the concerns of that era. The Martiniere worlds are a product of Covid and what we’re seeing right now.

We’ll see how it all turns out.

Comments Off on Shadow Worlds and alternative histories