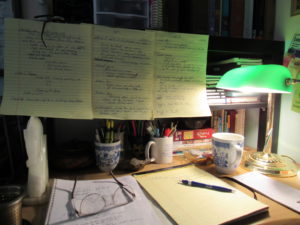 Sigh. I’m letting blog topics pile up on me again, but this one mugged me, in part because the event that kicked off the inspiration for this post just happened this morning.

I took a Publicity 101 workshop this morning with Barbara Linn Probst through Jane Friedman. Part of the motivation for taking this class is the ever-increasing need and desire to do promotion and publicity.

I learned a lot from this class, but my primary takeaway was that I really, REALLY needed to think about promoting not one book but my entire collection of work, especially in an era when I’m not certain if or when I will be doing live convention and bazaar appearances anytime soon. Both the husband and I are nervous, plus after a while, the thought of dealing with travel, etc, etc becomes tiring. I’m sure I’ll get over it as Covid finally settles down (and yes, I believe it will settle at some point) but, until then, I’m getting into my mid-sixties and have to think about situations where health and other issues might interfere with my ability to make live appearances.

Additionally, I’m also focusing on organic promotion activities rather than buying ads. Sure, people report large returns from buying ads. BUT. The outlays to get them–and the learning curve–is more than a little bit intimidating.

I also feel like I’ve not maximized my organic promotion potential. What’s in my way? Well, the lack of organization, for one. The inability to easily perform the task. The inability to flat out say that I am doing X today, Y tomorrow, and Z the day after on a regular basis.

See, I know the organic stuff works. I did a wee bit of it as part of the Martiniere Legacy promotion, and just that little bit of effort brought me more sales. However, there’s more to my backlog of work than the Martiniere Legacy. There’s the Goddess’s Honor books. Their sales have sadly fallen off since the Martiniere Legacy came on the scene. I need to make good new promotion for that series. I’m going to be rebranding and reissuing the Netwalk books starting in March. Then there’s the collection of standalone books, including the latest, Beating the Apocalypse, which is now available on Kindle and Kindle Unlimited. The short story reprints. The works-in-progress currently serializing on Kindle Vella and Substack.

But as part of looking up payments and fiddling around waiting for the news of the latest Kindle Vella bonuses, I spotted a listing of my works on Amazon. 40 works.

About half of those are anthologies I’m in, and short story reprints.

I should be seeing more sales than I am–and the fact that I’m not is entirely on me, and my lack of promotional work.

That, more than anything else, has kicked me in the butt. Oh, the other piece is that I also plan to update the interiors for the Goddess’s Honor works, as well as the back matter. That could lead to some cover adjustments for the paperback copies, but…it’s time for me to get organized on the promotional stuff, and get a system in place.

At the moment, what I’m considering is the following:

Make a set of images that relate to and describe each piece of those categories.

Rotate through the categories each week, with a seventh category–New Release Week, which will be the last week of every month–for 2022.

Make a schedule, and then DO IT. Get promotion to become part of a routine, so that it’s easy.

Therefore the picture above. Four pages of notes and planning, with some action items. The area pictured is my planning and handwriting desk space (my computer lives on a second desk; I need both spaces for optimal production).

I’ve been half-assing this promotional work for a while. It’s time for me to get my act together, and be productive, right? Not beat myself up trying to implement it all at once, but bite it off in small, doable chunks. Give myself several weeks or months to fully implement it.

There’s also an ulterior motive for me to write about this in a blog post–if I do this, then hopefully I’ll keep myself accountable and actually DO IT. Especially if I keep scheduling accountability reports…or at least, that’s the hope.

Comments Off on Publicity and Promotion Planning