Not a Netwalking Space post…well, except for maybe the last paragraph 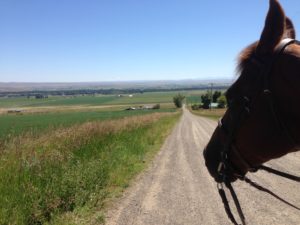 Actually, there has been other stuff going on this summer besides The Novel. We are painting house exteriors in Portland and in Enterprise; I’m helping with the big Portland project (ahem, when the temps and word count allow) while hubby is pretty much doing Enterprise on his own. Considering the Portland exterior is twice the size of the Enterprise exterior, well, that makes sense.

Part of what is going on is that the prescription for Mocha this summer is lots and lots of road riding. Once I got her past the half-mile hangup in hacking out, we’ve been able to do a lot of exploring on the local gravel and blacktop roads. We’ve got the hoof issues under control, however the other piece is that she is still going through muscle adaptation to new hoof angles. That means a few consults with the equine bodyworker, and a lot of hacking out at a walk with occasional trots. When we’re not in Enterprise, she’s been going out to pasture with other horses. It’s clear she likes that part of the new regime. The Stall Princess is now a Pasture Queen. Granted, that has nothing to do with her status in the herd, which is toward the bottom.

When I’m in Enterprise, though, we’re hitting the roads. It’s an easy three-quarter mile to the gravel road that gives us access to some interesting loops. I can do a three, four, five, or seven mile road ride at (mostly) a walk with gentle hills. Most of the ride is by ag land, with occasional house clusters. We pass by entire sections of alfalfa, wheat, various hay mixes, canola, peas, and flax as well as grazing land for cattle herds and some horses on our different routes. There’s lots of whitetail deer and a fewer number of mule deer. One three-sided garage seems to be an attractive midday nap site for muley bucks; I’ve seen a four point and a forked horn lounging in that outbuilding.

Along with the crops are the wildlife. We spot feral cats bounding through the cultivated grasslands, shy and wary enough to survive coyotes, eagles, and other predators. I’ve lost track of how many California Quail coveys we spot on a daily basis. I know one covey has barely-fledged young (clearly a second hatch) while a covey that shares the same area has fledged young capable of short flight. But there’s still another covey with young that except for size look adult. Occasionally we encounter a China ringneck pheasant; fortunately, none have exploded out from under our feet. We’ve seen marmots, raptors from kestrels to eagles in size, ruffed grouse, and a distant coyote. And deer. Lots of deer. Last night, we encountered twin whitetail fawns hanging around the road. Big spotty fawns, no sign of mama. They didn’t take off until Mocha picked up a pricked-ear trot to check them out, and then they crashed through the canola fields, white tails flagging back and forth as they disappeared between leaps.

My horseback time is useful for learning the difference between whitetail and mule deer behavior. Muleys tend to freeze and look. Whitetails look, then run with their tails wagging and flashing high. If you hold, then the muley holds. The whitetail just plain takes off. They tend to run more blindly and their flight path follows predictable patterns–often right in front of us. If I were hunting whitetails, I think I can now predict the flight line they’ll take, because the terrain definitely seems to affect how they flee.

Deer don’t seem to faze Mocha. The closest incident we had was when the four point muley buck blew out of that garage almost on top of us. But even then it was a jump and freeze reaction on her part. She’s the steadiest road horse I’ve been on, in the sense that I have more confidence in her response to me than I ever did with Sparkle. Sparkle was a decent road horse, but she had an unpredictable bronc element that Mocha lacks. If things get really crazy with Mocha, I can dismount, walk a ways with her, then get back on and be confident she’s okay. Couldn’t do that with Sparkle. A definite difference in breeding and training, for sure. That said, I ride out with four reins on Mocha. Just a bit of power steering and power brakes, you might say. Most of the time, we’re marching along on the buckle. It’s those other moments when I need that little reminder. Sparkle was a bronc who might choose to react by bucking or rearing. Mocha is flat out reactive and possesses a bit of sting. But her reactivity is easily managed and that sting can be defused. She’s hotter than Sparkle ever dreamed of being but she has a lot more sense. However, both mares enjoy and enjoyed hacking out. The big difference is that Mocha might startle and maybe take a couple running strides, but Sparkle would run with a few bucks.

So this summer I’m throwing back to my childhood in the Mohawk Valley riding the small handful of gravel roads available to me from my parents’ place, only I have many more options. Plus the view on Alder Slope beats anything in the Mohawk hands down. I can look to the north and see the plateau country transitioning into the canyon country, or look to the east and see more plateau country leading to more canyon country and the Seven Devils. South, of course, are the Wallowas, especially Ruby Peak, Hurricane Creek, Chief Joseph, and Mt. Howard. Nothing like riding along on a good saddle mare with a big walk.

At the same time I’m pounding away on Netwalking Space. I passed the 30k mark today and I’m on target for getting dang close to 60K by September 1st if I can sustain this pace. It’s not the killer pace of Nano–I’m trying to average about 2500 words a day, every day, without doing the brutal 5k and 6500 word days I did during Nano. The highest word count day I have so far is 3500 words and I have a few 3100 days under my belt. I am going to be traveling a little bit in forthcoming days so I need to have a few overage days to hit my average. The other, good thing is that while the plot matrix has now become “plan? what plan? we don’t need no stinkin’ writing plans” to some extent, it still gives me enough guidance to provide some chapter outline work to give me a guide to where I’m going now. The other piece is that I think this story is going to come in at around 70k-80k words. I could be wrong, but we’ll see. I’ve hit some points at 30k that I thought would come later…on the other hand, I have two more big plot punches I can throw. So we’ll see what happens.

There you have it–a recent update that isn’t all Netwalking Space.

Comments Off on Not a Netwalking Space post…well, except for maybe the last paragraph