So The Girl is now back to a regular shoe, which means regular conditioning and training…with mindfulness because she’s somehow managed to bruise the sole of the other forefoot. In spite of stall rest. In spite of limited work. Somehow she bruised it. Not badly, but enough for the farrier to comment on it.

But. She’s now in conditioning mode. Yesterday, I lunged her because I didn’t want her to take off running and hurt herself. I clucked her up to a trot, she automatically responded, and….halfway around the circle, you could suddenly see the realization strike–“Hey! I’M NOT WALKING! THAT SHOE’S GONE!” She tossed her head, launched into a big jump, landed, prepared to rocket off—

She settled back into a bigger trot, but there were several more incidents of head-tossing and leaping, and a little bit of loping along with a few strides of gallop. Fortunately, between her own good sense, the mild ouchiness of the sore foot, and her conditioned training responses, she never got crazy. Gotta love a good-minded horse. The mare of my youth would have been dancing all over the arena walls long before now. Sparkle never was one for being patient. I learned a lot from her, but damn, I sure wouldn’t want one like her back in my life now. I appreciate Mocha’s sense and good mind.

So today, we had a taste of conditioning time. She’s back in the English tack for early stage conditioning because it’s lighter weight than the Western tack and it’ll fit for now (I may borrow some shims from Gregg to see if I can address the one fit issue–OTOH, previous issues came along as we did higher level schooling and we can go back to Western by that point. It’s pretty clear by now that we do better working higher level stuff in Western, but I’ll save the English tack for conditioning and light hacking). I cleaned and conditioned the English boots and saddle yesterday, and stopped by Glisan Street Saddlery to buy a couple of inexpensive secondhand britches. I’m pretty happy with what I found, one pair for $20, the other for $10. Good enough for schooling even in summer, and in good enough shape to wear to a show. Plus the $20 pair were Ariat full seat britches, which I wore. 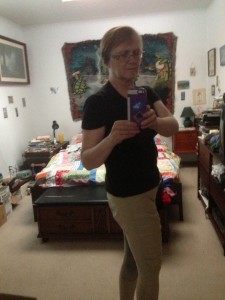 As it were, with just that little bit of trot work, Mocha was swaggering around happily at the end of our ride. No more of that coiled frustration underneath me. No annoyed grunts and complaints. Just a happy horse with a free-swinging, relaxed back. All’s right in Mocha’s world now.

To make things better, she got to go into turnout today. I know she’s missed being in turnout due to her shoe–the wistful whicker she’d give when I’d show up at the barn when most of the other horses were turned out, with only the injured on stall rest left inside, spoke eons about her state of mind. She didn’t go out with the mare herd, just into one of the small pens (but it wasn’t small enough for safe turnout when she had the bar shoe). So she gets to amble around the pen, roll, and crop grass. Back to working life for her–and I think she heartily approves.

Comments Off on Back to training