Last trip to Farpoint was about falling in love with the house and our projected future. This trip was more about the reality–which is that we are looking at big things and the biggest remodel job we’ve ever done on a house, long distance. Scary stuff. Plus, with the political season setting in, the worry of “will we fit in?” We have to remind ourselves that we are not, not, not going to be political. Those days are done, and if we were going to revive that past history, we’d have gone to Eugene. Nope. Not going there.

But we also did the things that reminded us of why we’re making this move. No visits to friends this time as the schedule just wasn’t that leisurely–up on Saturday, back on Sunday. However, after a cursory inspection of the new plumbing job, we hopped back in the car and drove ten minutes to get to Wallowa Lake to go fishing. The wind was rising high, waves of about a foot and a half whacking the shore, stiff northern breeze…and on my fourth cast, I caught myself a nice rainbow trout. Native lake trout, 14 inches long, “with shoulders,” as the saying goes. 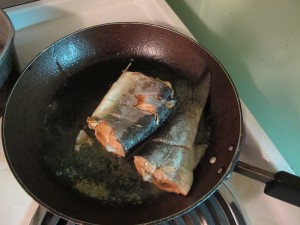 I wasn’t going to lose this beauty as it hit hard and grabbed the hook deep. So there was that.

Then, the next morning, we hopped in the car after a camp breakfast of cinnamon rolls and cruised out Thomason Meadows toward Zumwalt and the Findley Buttes. We saw a big herd of deer sunning themselves on one slope. Lots of Western Meadowlarks and Mountain Bluebirds singing. Several falcons. Good pix, some of which may make their way into the Andrews Ranch book. Gorgeous mountain views, some of which will make their way into a book. Saw a small herd of what probably were bucks making their way over a ridge. And we encountered a large cow-calf herd getting driven from winter pasture to summer pasture. We drove halfway through until we came to an unmounted human and asked for directions, then strategically parked to block an open gate to keep the stragglers from trying to duck off to the side.

I didn’t take any pictures. The herd was skittery enough as they were, and the cowpunchers (male and female) were working them slow, trying to keep the calves mothered up. It was easy to spot the wise older and calmer cows as they kept their calves close and paced themselves so that calf didn’t get tired and fall back. But there were anxious younger and hotter-tempered cows who’d take off ahead, then remember their calves, and start bellowing and backtracking. Meanwhile, the cowpunchers had a tight little group of outpaced, separated calves marching down a ditch. You could see which calves would probably make the nervous, hotter adults based on their reactions, too.

Except for one mule with a 7-shank curb, all the horses were ridden in snaffles with slobber straps (one rider had bit chains instead of a strap). I finally got to see the slobber strap in proper use.

Anyway, the reality of the house set in on this trip. It has nice bones, but it is a converted boiler shack that became a family home that became a retiree’s last place. What upgrades there are were put in to make the last resident comfortable. Now…it needs more. 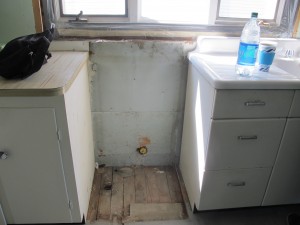 The ancient dishwasher is gone as part of the plumbing reforms. We’re now talking about putting in a second sink there. The next step is new windows and new flooring in the kitchen and living room, as well as wall removal. Then….we keep going back and forth about upgrading the tiny bathroom and creating two master suites. That piece may be gravy, but the bathroom needs something.

It feels overwhelming. But we take a deep breath and keep on plugging, a little bit at a time.

In two months we won’t have the constraints that keep us to these short two-day trips (my job, primarily). We can make these into three day trips during the summer, and take longer trips during the off season when the schedule works better for DH.

Meanwhile, the other cool thing about the 700 mile round trip is that we get to see critters. Four big rams with huge horns posed by I-84 near the John Day river. The flock of turkeys on the hillside above Elgin. 8-10 eagles on the river through the Gorge. All sorts of other raptors. And lots of deer and Canadian geese. Plus the pileated woodpecker that flew in front of the car going over Tollgate.

I drove that trip in 5 3/4th hours coming home, 6 hours plus (with stops) on the way up–and Addie-the-car got 30.9 mpg on the way back, with a little wind assist. No big stops on the way home, just to get gas in Hood River (which was as expensive as buying gas in the County! Yikes!). Got the doctor letter which confirms arthritis in my thumb.

Sigh. Back to the current reality.

Comments Off on Another Farpoint Moment

Tagged as Farpoint, retirement adventures, what have we done??!!?!