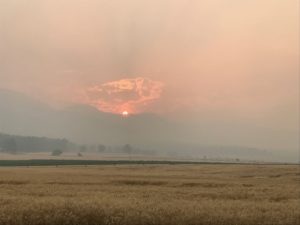 I took this picture last night, on my way back from my daily graining and check on Mocha.

The fire season is upon us, and is it ever a doozy. We were doing pretty well with rain accompanying thunderstorms until the next-to-the-last week of August, when a nasty set of thunderstorms passed through Northeastern Oregon and sparked off several big fires–to the east, the south, and the west, roughly. We are now at the largest fire complex in Oregon, but of course we’re not getting much coverage about it.

Typical. I’ve seen it before, when the only reason I knew what was going on was due to past connections with the area (I Have Very Cynical Thoughts but not ready to write about that yet).

In any case, there’s no immediate danger–so far. Today is the touchy day as far as Mocha is concerned–she’s located in a more vulnerable area than we are, and evacuation might be a possibility, though unlikely. The ranch is already dealing with evacuated horses from other areas, so if she can stay safely where she is, that’s a big plus.

But there’s wind, and dry thunderstorms in the mix, so it’s a day to be alert.

Meanwhile–let’s see. What has been going on lately?

The Netwalk Sequence reissue is complete, and now I feel comfortable putting it together in a box set (which will be its own craziness). Besides making a box set for it, I’m also going to be making box sets of the Martiniere Legacy series, the People of the Martiniere Legacy series, and the Goddess’s Honor series. Hmm. I’ve managed to complete FOUR series. How on earth did that happen?

(um, well, guess what I’ve been doing ever since Covid?)

At this point, I’m taking a break from big projects because, as I learned from doing the Netwalk Sequence revisions, this sort of production work eats my brain. Additonally, I need to have some down time after blasting my way through the three Martiniere series in nearly three years. I first semi-pitched the foundation for the Martiniere books to a small press publisher back in November of 2019, at Orycon. When they rejected the final project, I went ahead and…well, that’s how the main Martiniere Legacy happened. Four books there.

I ended up writing three character-based books tied to the Legacy–the People of the Martiniere Legacy. Three books there.

The Enduring Legacy kicked off a “what if” alternative version history. Two books there, the last of which (A Different Life: Now. Always. Forever.) will go into production once it’s been complete on Kindle Vella for the required number of days.

Nine books in that time period. Yeah, I’m a little frazzled. And that doesn’t count the rewrite of Seeking Shelter, Beating the Apocalypse, which I haven’t been promoting. But that was mostly-written, and just needed a push to get past some difficult spots. Nor does it count the novellas Bearing Witness or Becoming Solo, both of which were in the same position. I used Kindle Vella to push myself to get those stories finished. I have one more book in that position–partially written, that if I can get it drafted and out there, will be one less story niggling at my brain.

Now I get to think about new stuff–and what I am thinking about at the moment is breathing life back into my short fiction. It’s time.

But there’s another, more difficult world that I’ve been struggling with. Parts of it aren’t usable. They’re problematic, and reflective of my awareness level nearly twenty years ago. But there are some foundational ideas that I can breathe life back into, so I’m going to be looking at those possibilities.

Another thing going on, however, is that I’m in a position where I just plain have fewer spoons available to take on big new projects. The biggest thing is that I have a fast-growing cataract in the inside corner of my right eye. It slows down my work because of fatigue–both physical (eye muscles) and mental (coping strategies).

But hey, I’m a former special ed teacher! Figuring out coping strategies used to be my job!

Among other things, I’ve become a big fan of eyemasks with gel packs. I have a special one for bedtime that doesn’t involve elastic or Velcro to tug at my hair. Another, sequined one that I use to give my eyes a break during the day–I had bought it thinking it was useful for a sleep mask and, well, no. I keep the gel pack inserts in the fridge. The sequined one gets used for the other coping strategy, which is lying down with it on for an hour or so in the afternoon. Sometimes I nap, sometimes I just lie there and think. That’s been a huge help. I realized with the sleep gel pack mask that part of my problems involved facial muscle tension, and the cool pack really helped with that.

All the same, that plus the need to take more breaks than usual mean less productivity. And while I’m allegedly on “the list” for cataract surgery, everything is backlogged big time. I need to go rattle cages if I don’t hear anything today.

My laptop blew up and I’m trying to make do with my iPad when writing away from my desktop. It’s–not a perfect solution. I can draft on the iPad but not edit. Oh well.

So this is going to be a fall of short writing (um, for some definitions of “short”–I also plan to be working on stuff that will likely turn into novelettes), box set production and–the sorely hit-and-miss promotion piece.

Stay tuned, because I hope to be getting more out there soon!

Comments Off on Smoke, fire, Worldcon, cataract, writing…oh my!