Netwalk’s Children…and so it begins. 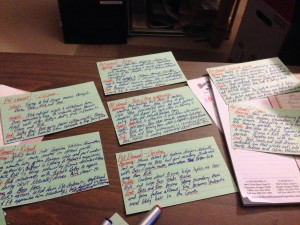 I just texted the above picture to a friend with the note that I needed to break out the notecards…what one does with the third book of a series. Hoo boy, is this ever a writing change. While I’ve never been a complete pantser (oh dear God, after years of lecturing about prewriting to kids, I At Least Do Some Prewriting), at this point I am Officially Tired of having to go back through and tweak everything after the first draft. Or digging through piles of handwritten notes on assorted scraps of paper. I have some significant series threads that need to surface in this volume (one reason I have been procrastinating the writing of this damned book, this Netwalk’s Children, for at least two years). I need to track reveals, clues, and character arcs.

I admit that I was wowed and amazed by the release of J.K. Rowling’s outline for chapters 13-24 of the 5th Harry Potter. Am I likely to go into that much detail? No, probably not, because I don’t think I have that many subplots. What I’m having to track are character arcs, because I have some series-long arcs as well as several-book arcs.

Over the past few years, too, I’ve written some short stories to help me understand and play with aspects of this universe that I want to develop–not so much the tech but the characters and how they react to the tech. I’m leaving the tech as mostly handwavium until I get to the actual writing, simply because I can’t base the plots too heavily around the tech. It changes too quickly. What I can write about is the implications of what that kind of tech will do to characters and their way of thinking. I’ve spent two book volumes and an omnibus volume of novellas laying the ground for this book (and am developing a short story series along with this book to develop the themes)–and now, we’re in the third generation of the Netwalk/Dialogue tech. It’s time for the kids to react–and carry the wave of tech forward.

Yeah, yeah, vagueblogging. I’m tired, I’m toying with ideas, and this is supposed to be a writing process blog, not blathering about the book itself. But that’s another reason why I am settling in for some serious prewriting and blocking of this book. This damn world gets away from me, more than any other I’ve been playing in so far. I can’t say that Seeking Shelter, Pledges of Honor, or Alien Savvy have demonstrated the ability that the books in this world consistently do in twisting out of loose pantser plotting and creating more complexity which requires elaborate rewrites. I’ve spent too damn many hours going back and doggedly revising because I didn’t think through what the probable answer to a single scribbled sentence would be before I had to write it. Part of that is because I was already detailing lesson plans, IEPs, evaluation plans, etc, etc, etc. But I can’t count on snow days any more to deal with midbook vagueplotting issues.

Well, no more. I’m a working writer, not a teacher-writer, and I have to get into the groove of turning out a good, consistent book on a predictable cycle. I know I do better with a framework–it works for my short stories when I have to purge too many Big Ideas. With this many threads that I want to maintain, I need the help of the structure.

Additionally, this book is going to be written and revised during a moving process. I can’t count on having time to dig continuity out of my brain. I also have a personal hard deadline as I want it out by Worldcon. So…to the grindstone I go.

My hope is that having the reference structure will allow the words to flow, because I also want good words. I really want that good language to dance and sing.

Seriously, I am enjoying it. Really. It’s nice to be possessed by a story again.

Comments Off on Netwalk’s Children…and so it begins.