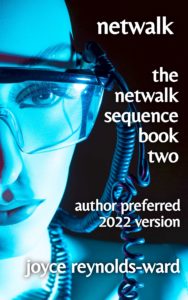 Some of you may be wondering why this is the third Happy Book Day for Netwalk. Easy enough to explain. Netwalk was the first book I self-published, way back in the Wild West selfpub days of 2011. The first cover was…uh, kinda sad, and I forget how the layout looked.

A year later, the son did the layout in InDesign and I managed to get a cover artist. That cover is still lovely, but–as it turned out, the rest of the series had multiple artists (including me), there was no consistent branding, and…not only were there continuity problems and layout that wasn’t up to 2022 standards, but the tech rapidly became outdated. Additionally, when I first published Netwalk, I really didn’t have a firm grasp on the backstory. Most of Life in the Shadows was written between Netwalker Uprising and Netwalk’s Children, and I still didn’t really have that solid a grasp on the nature of the overarching series conflicts and how they resolved. This series…I tell you, this series taught me a LOT about what to do and what not to do when writing in a series. I was still learning when I wrote the Goddess’s Honor books, but the Martiniere Legacy series was the culmination (so far) of what I’ve learned about the dos and don’ts of series writing.

The Netwalk Sequence, though…it was my original love, and it needed repair. Badly. I didn’t feel like trying to promote it at all.

Therefore, I decided it was time to create a new edition. Originally, the Author Preferred release was going to be 2021. However, things happened, including an outbreak of more Martiniere stories and snafus with cover artist availability.

Then I got BookBrush. Found a series of photos on Depositphotos that really do fit the whole series concept so much better than some of my original concepts. Spent money on the original editor (hi Catja, and thank you!) to vet my revisions.

Diving back into Netwalk itself didn’t have the same dire associations as Life in the Shadows did with political gloom and doom, though there’s still a bunch of that. I tweaked that a bit more, updated some wonky formatting, and fixed a bunch of continuity problems that just hadn’t gotten themselves fixed the second time around. In the process, I managed to sharpen Melanie up, clarify the degree to which she’s ADHD but still makes things work (helps that I finally admit to my own ADHD), and drilled down on the family conflicts.

Plus this blurb is multiple-multiple times better than the original.

Note: You don’t have to read Life in the Shadows to appreciate Netwalk, although it gives you a deeper understanding of the conflicts between Sarah and Diana. There’s a reason why Shadows is now officially Book One, instead of being just Related Material. Although, annoyingly, Shadows still doesn’t have the “Look Inside” feature activated, while Netwalk does.

So, for those of you who haven’t encountered Netwalk before–here’s the blurb, this time around.

IN A TECH-DRIVEN FAMILY, HARD CHOICES PASS TO THE NEXT GENERATION

Will things ever change?

When they do, who will survive?

What role does the Disruption Machine—now known as the Gizmo—play in the emergence of the new Netwalk technology? Why does the Gizmo manage to unite Sarah and Melanie’s mother Diana, when they disagree on just about any other subject?

The struggle for control within this family can change the world—for better or for worse.

And Melanie wants to be the winner.

Comments Off on Happy Book Day (for the third time) Netwalk!