A long and productive weekend

The latest run to Farpoint was quite productive, indeed. We had to negotiate a freezing rain travel window (both I-84 and Tollgate over the Blues were closed for a while on Thursday) as the weather transitioned from cold to warmer and wet. We did get to see some lovely views in the Gorge, and stopped at Multnomah Falls. Of course, my good camera was buried under luggage so the phone camera had to do. 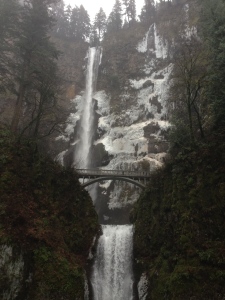 The other challenge of this trip was that we took the new-to-us pickup with a load of vinyl tile. While the Dakota has four-wheel-drive and wide tires, it doesn’t have studless snows. Pickups can be a bit skittery in snow and ice, and we’ve not really played with this one in adverse conditions yet. Still haven’t, except for ice. Nonetheless, it performed quite nicely, chugging in a most workmanlike manner up Cabbage Hill with a load that weighed at least a half ton in pea soup fog. Gas mileage is not the greatest (a 1999 with a v-8 engine is not what you’re looking for when it comes to getting the good mileage) but it’s a quite satisfactory sturdy driving rig for hauling stuff.

Once we were at Farpoint, we set about Doing Stuff. One Stuff to be done was to drive down to Wallowa and pick up 30 packages of insulation batts. I ended up finding a better solution than spending the day driving, which meant I had more time to work on Other Stuff, such as…

When we first set eyes on the red thing, we thought it was an old-timey Coca-Cola cooler. But it was buried under old roofing, a toilet still in the boxes, and lots of other stuff. As we dug the corner out, we discovered that The Red Thing is a coal stoker hopper. It still had some coal in it, and I discovered the label–Fairbanks-Morse. We tried moving it around, but there’s still ash in the burner part and it’s pretty heavy even with the coal dug out. Not sure what we’re going to do with it, but eventually…

Coal in the hopper 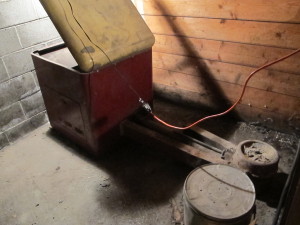 Before cleaning. I mopped the walls and floor of this area (the former coal bin) and got about an inch of residue in the bucket when I was done (and disposed of it in a sacrifice area where we aren’t going to grow anything).

So yeah. Hubby and I got major basement cleaning done. The goal is to clean it out, paint the walls with a moisture lock paint, and start at least storing books down there.

We also got a dump run accomplished, to gorgeous views. 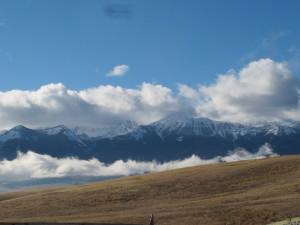 Nice view from the dump, hmm?

Even with rain and fog, we still had mountain views most of the days. I got windows measured for curtains, because hopefully the floors and kitchen will be done the next time we go up, so that we can hang curtains and start moving things in (we have not wanted to do much with it yet because the tile to be pulled up is asbestos and didn’t want to paint/clean until that was done).

The drive home yesterday was full of “so this is why we bought a place where we did.” Enterprise had sun. But as we drove north, down the valley, we encountered fog, but only at a certain elevation (which happened to include the towns of Lostine and Wallowa). Then we were out of it again, until Elgin. Up over Tollgate wasn’t bad, with sunshine, but we dropped into pea soup fog near Weston and felt our way along the highway with near-freezing temps in the fog until almost Pendleton. After that, things were clear at road level with heavy cloud cover.

Making the run with the pickup was fun, but it’s definitely not a regular long-drive vehicle, not when we have the Subaru handy. On the other hand, it’s a pretty good little working vehicle.

And now it’s back to writer life, and a lot of other stuff. Time to get the week going.

Comments Off on A long and productive weekend