The rest of the trip

It’s been a busy week, but there was more going on during our trip than Spocon. We drove up to Spokane the day before. It was a lovely day for a drive, offering opportunities for pictures like this: 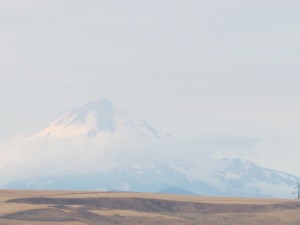 Lots more cool views than pictures. In the Spocon post, I talked about waterfall pictures. We took a long walk from the hotel (Fairfield) along the river and walked from the Upper Falls to the Lower Falls and I found these stunning shots along the way. 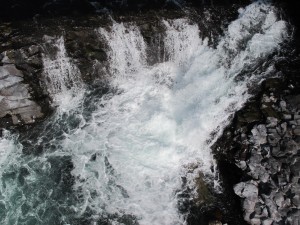 Sunday, after my last panel and all the goodbyes, we hopped in the car and drove from Spokane to Enterprise. We had not driven the road between Spokane and Lewiston, so we enjoyed new views. One of the con attendees was puzzled that it would take so long to drive a short distance (4 1/2 hours for around 175 miles), at least until she pulled up the map on her iPhone and saw the various snaky grades…down the hill into Lewiston, then up the hill from Asotin. But it’s past Antone that things really get wild.

It’s called Rattlesnake Grade. DH and I have not traveled it for over thirty years, and we only did it once together. But we both had memories of a long, winding grade both up and down a steep canyon. We’d completely forgotten about all the plateau country on the Washington side before we got there. And, before we descended into the Rattlesnake, we spotted a pair of wild turkeys–tom and hen–scratching gravel at the edge of the highway. Cool.

And yes, people do travel this road regularly in winter, with ice, snow, and below zero temps. It is our shortest route to Spokane. Otherwise we have to go west through Elgin and Milton-Freewater to reach Lewiston and then head up.

On the top, near Flora, I had to slam on the brakes because a set of gangling wild turkey poults skittered across the road and, being young and fledglings and somewhat on the foolish side, they weren’t really eager to move for some big stupid stinky metal thing. That was still cool.

We stopped at Joseph Canyon Overlook. We’ve not been there for ages–I think it was after the fires of 1986. This is also the area where the upcoming Andrews Ranch (better title forthcoming!) is set.

And then we reached Enterprise and Farpoint, to discover that despite what we thought, the contractor had installed all of the windows. Even better, he had been able to get a full greenhouse window into the kitchen window (he had thought he couldn’t get one that would be big enough). 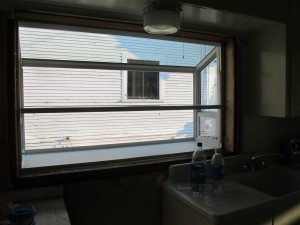 I am soooo happy about this. The window shelf is glass instead of wire like the one in the Woodstock house. I can haz planz.

And because it’s required, a mountain view.

Other stuff happened, mostly pleasant. And then we were off to home and another week in the life. But my, this was such a pleasant five day trip in many ways.

Comments Off on The rest of the trip