Beyond Honor release date and cover reveal, plus Birth of Sorrows

So the release date for Beyond Honor is going to be July 1, perhaps sooner but that’s going to be the official date that it will be available on Amazon, Nook, Kobo, Apple iBooks, and etc. I have a lovely cover designed by Roslyn McFarland, and as of yesterday I put down the first 1000 words of the short story that is going to be featured in the Coming Soon pages at the end of Beyond Honor–“Birth of Sorrows,” a short story about the birth of Alicira’s daughter Rekaré, which follows about six months after the events of Beyond Honor. 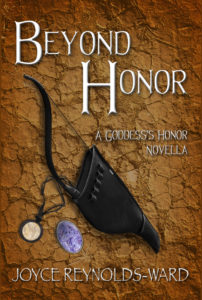 Isn’t it a lovely little thing?

And as for “Birth of Sorrows,” well, that’s a lovely thing as well. Here’s an excerpt:

It could be forgivable to assume that the shimmering of the air over the high mountain ridge’s grassland was nothing more than early summer’s heat. But edgy silence accompanied the flickering air as the midafternoon sun beat down on the broad, flat expanse. No crickets chirped, no hawks screamed. Even the camp of Keldaran and Clendan kinfolk summering on the high ridge lay mute; no children running, the camp herds clustered together, adults doing only what was urgent. Otherwise, they, too, watched as magic spread out from the large mat lodge belonging to their leaders, Heinmyets of Keldara, Inharise of Clenda, and Alicira the Outcast.

A long shriek echoed through the camp. The air on the open flat quavered stronger than ever and the strong, thrumming vibration that announced a God’s impending arrival even to the uninitiated and magicless rolled over the ridge in response to the cry. Another scream burst from the lodge, followed by sobbing gasps for air. Magic thickened around the camp, its heavy hand spreading fear even among the adults so that they signed protections for themselves and their children.

Orlanden en Selail’s fingers itched to pull his bow out of its case as he stood head of the guard around the Leaders’ lodge. He was no stranger to powerful magic, but this high sorcery of the Seven Crowned Gods made his skin prickle as if venomous centipedes were crawling all over him. His normal response to this sensation would be to prepare for a battle.

But not this time. Not when a sorceress of the Miteal gave birth to another sorceress of equal or greater potential power. Alicira the Outcast, exiled though she might be, still carried significant magical power that she had needed to put away during the last part of her pregnancy. Now, with the impending birth of this child, Alicira’s magic rebounded with renewed strength to protect her against the uncontrolled fledging power her daughter would wield in her first breaths.

What was the old saying? When sorceress gives birth to sorceress, the Gods themselves may tremble. Given that the sire of this girl was none other than Zauril the Usurper, a strong and powerful magician with aspirations to join the Seven’s pantheon by overthrowing one of them, there was no doubt in Orlanden’s mind that the Gods were trembling. No doubt that at least one of the Gods, if not all of them, would come to witness her birth.

I’m thinking that I may read from this at MisCon, possibly also a snippet from Beyond Honor. Sound intriguing?

Comments Off on Beyond Honor release date and cover reveal, plus Birth of Sorrows