First day back on the slopes–latest for some years, but given the conditions, well, that’s just the way it is. Even though the snow was lower than it should be, it was still a gorgeous bluebird ski day. Crispy groomed packed Cascade concrete. Yum.

I was somewhat conservative today. While I try to do a ten minute yoga practice (with video) almost every day, with Mocha being ouchy I’ve not been riding as much. I’ve also just been tired and not wanting to work out as hard. Add to that the difficult new boots, and I wanted just a plain vanilla slope to make sure the hips and knees worked, and to get myself back into it with the new boots.

I went photo-mad early on because the light was one I hadn’t caught before. There were some interesting cloud patterns over Hood, but I don’t think I caught them just right. The closest was probably one snap from the iPhone. 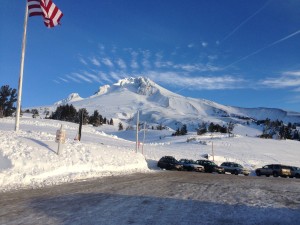 But it would need edits. Nonetheless, I could see it as a story illo with some edits. Or maybe a cover.

Anyway. The new boots are working wonderfully, though I may need to get the toe area stretched a little. We’ll see how they break in. I love the way they stabilize my heel. My heels tend to like to wander and most boots run too wide for my heels. Not these. The Dalbello Electra is a stiffer boot than I’ve skied before, and they are a beyotch to wrench on, but once I get settled into the sweet spot in the boots, they are a responsive and easy boot to manage. Amazing, considering all my issues last spring–but that’s usually The Way of Boots. It’s better to start out the season with the new boots.

Eight runs on Norman, all told–about six miles. Not much wind, sunny, interesting light, packed powder and not ice–made for a nice ski morning. The first hour or so was mostly us older folk, and then about ten the kids and other folks started showing up.

My weaker leg ached slightly but it stopped during each lift ride, which meant I was working it but not killing it. I never felt like I was getting tired and sore enough to have control problems, or hips not working (which was another reason to hang out on Norman–straight shot down the slope with lots of little rolling pitches).

Not too bad for a first day on the slopes.

Comments Off on Ski Grrrl’s baaack