Painting, wind, and wildlife was the theme of this last Farpoint run. When we headed up to Enterprise last Thursday, we got hit by heavy rain and wind in the nastiest spot for it, a stretch of tight and narrow curves on I 84 between Dodson and Hood River. I swear the eastbound route is worse than the westbound…and without studless snows, the Dakota doesn’t quite ford massive freeway puddles as well as the Subie. Nonetheless, we trucked on and made it into drier and at the time less windier climes.

We arrived to discover shower in the bathroom. It had been a tough choice to tear out the old iron bathtub, but it was just too tall and too deep for us to get in and out of safely, plus it just dominated the whole damn bathroom. The contractor not only replaced it with a lovely angled shower which gives us room for a storage space (plus space within the bathroom), but he found someone to take the big ol’ non-clawfooted tub for a planter. 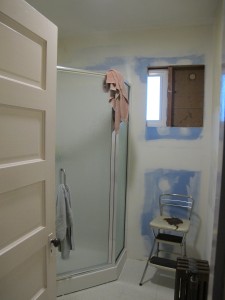 It was mildly windy Thursday evening but NBD. We started to hang curtains and I found that I needed to rehem the office and kitchen curtains because they were too long. Better than too short. Tired from the drive and all, we crashed early. I slept fitfully and was awakened in the early morning first by a “thud” (later discovered to be a shingle that had hit the Dakota), and then the loud roaring of a freight train. My first thought was that the basement furnace was unusually loud, then “train,” then “no, this is Wallowa County not Portland–WIND.” Got up to see the pine tree’s branches dancing wildly, went back to bed…and then the lights went out. Tried calling Pacific Power, but discovered that power was going down over much of Eastern Oregon due to strong winds.  The lights came back on within half an hour, so we went back to sleep, flashlights by the bed.

Next morning, we had power, several shingles from the neighbor’s house in the yard, and stronger wind. Our tree danced and writhed gracefully, giving rather than resisting. I eyeballed our roof and we had solid shingles. Never did lose any, in part thanks to hubby getting up on the roof last fall to nail down some loose ones. The wind continued with some mighty gusts. We ate, then started painting. I made a quick run down to the Dollar Stretcher for supplies we had forgotten to pick up at Safeway the night before, and was astounded by the number of uprooted trees and broken limbs already strewing the town. But it wasn’t until I got out of the truck that I realized we were experiencing strong Gorge-level winds. I kind of muttered “this isn’t Crown Point, is it?” to myself before going inside the store…where I heard that the town of Joseph was still without power and had been hit pretty hard by the high winds.

Going back, I saw wind ripping metal roofing off of houses, but thankfully no trees falling or branches coming down right that moment. Little Farpoint seemed to hunker right down into the hillside and so we painted, painted, painted. I’d look up from primering in the living room and watch the stop sign and school warning sign get hammered by the wind in the next block down. The wind twisted the stop sign all the way around so that we could see the front of it instead of our usual view of the back, and it bent the school zone sign into a 45 degree angle. About that time I also noticed that Pacific Power had replaced our old power pole sometime in the last month, for which I was quite grateful–after watching it dance in a milder windstorm last fall, I think this one would have taken it.

But with every pause to watch the dance of the signs, I could see more shingles gone from houses in the neighborhood. I never actually saw those shingles go but every time I looked, several houses had shingles gone. We later heard from our contractor (who spent most of Friday and Saturday repairing roofs in Joseph) that the wind had taken out a lot of trees in Joseph, and ripped off at least one roof down to sheeting and fascia. I guess up there it was 60 mph sustained winds with gusts to 90+ mph. We came through it okay, and the friends we met up with on Friday did as well.

As far as painting was concerned, we now have the entire living room and kitchen primered and ready for final coats, including all the cupboards in the kitchen. Yay. The rest of it should be much simpler as we have only one more set of cupboards in the utility hallway and that will probably just be next winter’s project. Freshly painted kitchen cupboards are a bigger deal.

And wildlife…Thursday night, while talking to a neighbor, I spotted a bird that landed in a big neighborhood tree. Good-sized bird, but it was dusk and not the usual time for a bird that big to be passing through–and then I noticed the shape, upright posture, and tell-tale tufts of feathers poking up. Great Horned Owl. Pointed it out to hubby and neighbor, and we admired it. The next day, our friend who used to work for Fish and Wildlife told us it was most probably one of the birds associated with a nest down near the Fish Hatchery road. Then, Sunday morning, I discovered a big owl casting in the yard. Looks like owl is finding food in the ‘hood.

We also have a herd of about ten mule deer lurking around. Thursday night we saw six of them, does and fawns, wandering down the hill through our yard and into the neighbor’s yard. We spotted them again on Friday evening sampling branches from a fallen tree in the bed and breakfast yard. Then, Sunday afternoon, they came pouring off the hill at a determined and skittery trot, all ten of them including at least one spike-antlered buck. They crossed the street, held in that yard for a moment, then high-tailed it off across the next street and down, pretty much in a straight line, never breaking into the big high hops but at a good ground-covering trot.

IOW, yet another productive and yet fun time at Farpoint. Soon we’ll be able to do more than luxury camping there–there’s still more remodeling which has to be done, but we’re reaching the downhill stretch. Yay.

(and yes, writing happened as well. I’m hoping to have Valentine Disruptions done and up by Valentine’s Day, but damnit, Sarah and Diana don’t want to cooperate. Not so much pew-pew but definitely boom today. Will post snippet later. More boom today!)

Comments Off on Painting, painting, and more painting