Or, How to Avoid the Muddle in the Middle and Not Go Crazy-1

One of the epic wars between novel writers is the debate about “plotter or pantser” plot organization methods. Some writers will plan their plots meticulously, to the degree that they write elaborate outlines, synopses, or matrices which chart the progress of their story. Others have detailed backstory notes but once the writing starts, it goes where it flows as they write by the seat of their pants…i.e., the pantser. And then there are those who do a little bit of each. Nonetheless, at some point, no matter which method you use, you have to organize your plot. You need to figure out where your story is going and where it ends.

Generally, no matter whether you’re plotting or pantsing, you’re working with a three act structure or, in some cases, four acts. The first third is the setup of your problem, the introduction of your characters, and learning about the world. The middle third is the march toward the high point of the story. The last third is the resolution, consequences of the high point happening, and either tying up loose ends or setting up the next book of a series.

That middle third of the book is where many writers bog down and where a good plot organization can save your behind. Part of that comes from the tension between wanting to get to that high point NOW and realizing that you have to create all the circumstances that allow you to reach that high point. You have to sustain the plot tension without maxing it out or losing it. But you also need to have that logical progression of events that leads the reader to that high point and then resolution. This is the part of the book that really benefits from a more organized approach.

So how best to organize your novel? There’s all sorts of ways to organize your plots. One structure is to chart out your plot scene-by-scene. This can be as casual as a quick note that “Gerard reaches out to Katy to beg for reconciliation” or as detailed as “Gerard’s POV. Other characters present-Katy, Tom, and Sheila. Action-Gerard begs Katy to come back at Sheila’s birthday party in front of Tom and Sheila. Purpose-Show Gerard’s utter humiliation at Katy’s rejection and the disclosure of her relationship with Tom, to Sheila’s dismay.” Now this is a method I prefer, but I have also written books without going into this detailed a scene outline.

Another method is to focus on certain key points in your story and let your characters guide you through the scenes that get you to those key points. For example, you know that Katy is going to reject Gerard in a quite public manner, but until you sit down and think about the scene, you don’t know that it is going to happen at Sheila’s birthday party and that Tom and Sheila are going to witness it. And Tom and Sheila are husband and wife, so it’s not just Gerard who ends up being humiliated as a result of Katy’s actions. With this method you are focusing on the arc of your character’s experience, how they change and grow throughout the course of the book, and how the story events shape this process.

A third means is to write a synopsis of your novel. Generally you’re not going to do this before you write the book, unless you are already published and pitching a new book via an agent. But it is also a good way to think about your book’s organization. A good synopsis hits the high points of your story, discusses the major plot points and character arcs, and describes the resolution. Most synopses tend to run from three to ten pages.

Still another method is to write specific scenes first and then organize them later, stitching them together in the rewrite phase. So perhaps you might write the ending first, or scenes approaching the high point, or the high point first and work out the rest of the book from there. I’ve never done this but have friends who use this method quite effectively. It just all depends on how your mind works.

Sometimes the nature of a book shapes the degree to which it is organized. For example, Choices of Honor, the third book in the Goddess’s Honor series, simply would not cooperate with my usual plot organization methods. I ended up charting a quick scene list, and that was when I realized that I was biting off too big a chunk of story to put into one book. However, the follow up book, Judgment of Honor, settled right into my scene outline process with no surprises. The Ruby Project: Origins, my current work-in-progress, was drafted off of a synopsis. I pantsed my contemporary fantasy, Klone’s Stronghold, because the protagonist had a very strong voice and opinions of her own about the progression of the story. These are just examples of how I vary my process based on the needs of the book.

Ultimately, the method you use to organize your plot comes down to what works best for you. It doesn’t hurt to play around with different methods when you work on your books and I highly encourage doing so—you might just be surprised at what happens.

Other posts in this series by Joyce Reynolds-Ward (note: each website owner will post at some point during the week listed).

April 19-25—My Approach to the writing process https://varidapr.com

April 26-May 2—Reading to Impact your writing www.conniejjasperson.com

May 3-9—Advice for new writers https://lecatts.wordpress.com 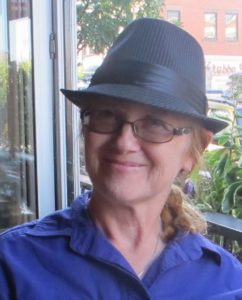 Joyce Reynolds-Ward is a speculative fiction writer from Enterprise, Oregon. Her short stories include appearances in Well…It’s Your Cow, Children of a Different Sky, Allegory, River, and Fantasy Scroll Magazine. Her agripunk thriller trilogy, The Ruby Project: Origins, The Ruby Project: Ascendant, The Ruby Project: Realization, are due for release in November, 2020. Her books include Shadow Harvest, Choices of Honor, Judgment of Honor, and Klone’s Stronghold. Joyce has edited two anthologies, Pulling Up Stakes (2018), and Whimsical Beasts (2019). Besides writing, Joyce enjoys reading, quilting, horses, and hiking, and is a member of Soroptimist International of Wallowa County.

Comments Off on NIWA Spring Blog Tour–Organizing Your Plot