The last way you want to start out a week of writing workshop is to wake up at oh-dark-thirty the morning before with a case of food poisoning. Epic though it was, however, once I had paid my respects to the white throne and went back to bed, I was okay other than feeling drug out and tired. Not sure what the cause was, or if it was even just a case of irritable bowel rebelling, but…whatever it was, I was grateful. But I’m still paranoid about food right now. Carbs are my friend, anything fatty or spicy gets eyed with suspicion, and…yeah. Bland is good. Fortunately, the Safeway in Enterprise has dairy-free yogurt, so I was also able to get things settled somewhat.

The other good piece was that formalities at Fishtrap didn’t start until late afternoon so I had plenty of rest and recovery time. So about mid-afternoon, in the face of a driving rainstorm more typical of March than July, I hopped in the Subaru and drove up to the lake. 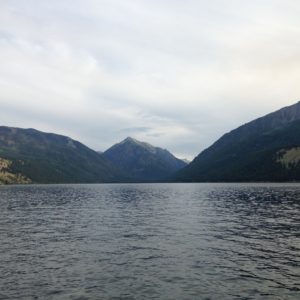 Yeah. Shucky darn. My commute for the next week is gonna look like this. Fishtrap happens at the head of Wallowa Lake, in a church camp nestled between two great ridges. This time of year the mock orange is still in bloom, deer prowl the camp, and even when it’s pouring down rain it’s gorgeous. Morning workshops run from 9-12, with afternoon panels and readings, and an evening reading.

This is the first conference I’ve attended where it’s about the writing–actual workshopping rather than a pitch conference or all lectures. It’s also more literary than any other conference I’ve attended before, with much less focus on marketing or self-promotion. Fishtrap’s emphasis is on Writing and the West, so much of the conference focuses on writing that evokes a strong sense of place. I’m doing a workshop on the uncanny with Marjorie Sandor, and so far I’ve found it to be productive. We did an in-class exercise this morning which led organically into a discussion of how physical setting can produce a sense of the uncanny and the meanings of various spaces.

For whatever reason, it often seems that I stumble into craft stuff just when I need it. Right now I’m nibbling at the initial outline, worldbuilding, and planning for Netwalking Space. Much of what we discussed this morning will end up going into shaping what I do with the building blocks for that story. It’s amazing how that works.

Tired now and realizing that I am writing jerky and nonflowing prose. Rather out of pace for a writing conference report, hmm? Oh well. Something is better than nothing.

Comments Off on Fishtrap, day 1.5